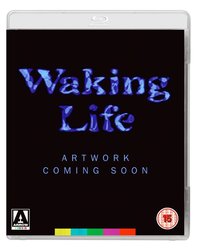 In 2001 writer-director Richard Linklater released a spiritual sequel to his acclaimed early features Slacker and Before Sunset. Taking its cue from their walk-and-talk stream of consciousness, Waking Life enquired into the relationship between dreams and the big screen, and how cinema captures the phantasy state.

Aiding Linklater’s exploration were two major players: actor Wiley Wiggins (Dazed and Confused, Computer Chess), who acts as our guide through the dreamscape, and animator Bob Sabiston, who created the appropriately disassociated, floating rotoscoped visuals. He and Linklater would later collaborate again on A Scanner Darkly to equally stunning effect.

Featuring Adam Goldberg, Nicky Katt, Julie Delpy and Ethan Hawke (reprising their Jesse and Céline characters from Before Sunset) and director Steven Soderbergh, Waking Life is an extraordinary thought-provoking trip, quite unlike anything before or since.