Tomorrow we have the next release in our collaboration with our friends at Nautilus Art Prints: THE BICYCLE THIEF (or, BICYCLE THIEVES) by Riccardo Guasco.

Often considered one of the best movies ever made, Vittorio De Sica's film is a genuine masterpiece of cinema and a pillar of Italian neorealism. The film is deceptively simple: in post-war Rome, a father and his son must track down the man who stole his bicycle, which he needs for his job and which ultimately represents hope and salvation for his poverty-stricken family. Riccardo Guasco's artwork is as poignant, elegant, and timeless as the film itself.

Available Tuesday, 4/20 at 11 AM Central on The Drop, with a Variant edition available directly from Nautilus Art Prints. 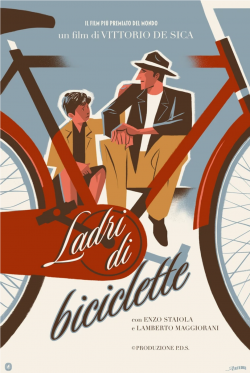 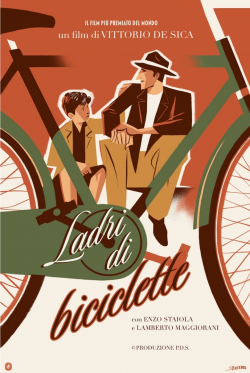