We’d like to take a moment to address the protests going on around the country. The protests, which were sparked by George Floyd’s murder, have helped us and so many others begin having the difficult, but necessary, conversations about the presence of systemic racism in our country. Bottleneck has always been a diverse and inclusive gallery, and to be explicit, we are firmly against racism and any other sentiment that devalues human life based on skin color, gender, or sexual orientation.


We’ve spent the weekend listening to the powerful Black voices in our lives, and in our community, and we’re taking action: Alongside today's release, Bottleneck will be donating $5,000 to the Thurgood Marshall College Fund. Per the TMCF’s site, “Established in 1987, the Thurgood Marshall College Fund (TMCF) is the nation’s largest organization exclusively representing the Black College Community. TMCF member-schools include the publicly-supported Historically Black Colleges and Universities (HBCUs) and Predominantly Black Institutions (PBIs). Publicly-supportedHBCUs enroll over 80% of all students attending HBCUs. Through scholarships, capacity building and research initiatives, innovative programs, and strategic partnerships, TMCF is a vital resource in the K-12 and higher education space. The organization is also a source for top employers seeking top talent for competitive internships and good jobs.”

Juan Ramos busts our favorite denizens out of Arkham and sets them loose with our newest print release, Batman: The Animated Series!


Juan’s print for the zenith of DC’s animated shows is a literal free-for-all featuring villains, allies, and most importantly, the Caped Crusader himself, Batman! The Animated Series holds a special place in our hearts, and Juan’s print is a batarang of nostalgia! 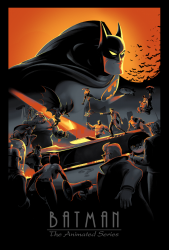