I know this movie sucked but there's a Target exclusive digibook of Fantastic Four (2015). 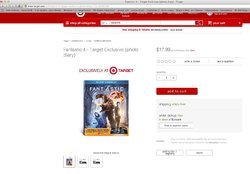 Has anyone seen this in person?
We've been fooled so often with it just being the reg slip with a book.

Here's an unboxing video from youtube. It's similar to Fox's Sleepy Hollow S1 and Epic.

another nice edition, too bad film not good

Thats actually really nice.
I only wish on the slip, the part that looks like a J card wasn't on it.

Everyone keeps saying this movie is really bad... I'll probably end up liking it because my expectations are so low. haha

You'll probably hate it @kaw. One of the worst I've seen in 2K15. You know its bad when almost everyone agrees

No, its legitimately bad.
The word "good" has nothing to do with this movie.
Reactions: kaw

I watched the new FF last night. They nailed the science aspect of the film as well as Reed and Ben's relationship. That said, it was way too rushed at the end, I felt zero sibling chemistry between Sue and Johnny, and Doom looked like complete @$$. All-in-all, I think it would've been a good sci-fi film if they would've left the Fantastic Four moniker off of it, but by adding it, it becomes a mediocre, not-so-great superhero film. It's just another so-so dark and gritty superhero film amongst a slew of other dark and gritty superhero films.
Reactions: monsterzebra

For anyone who's interested, there's also a Target digibook exclusive of The Maze Runner: Scorch Trials.

Have to get my hands on this to expand my Marvel collection..

Can someone help me get one please?

monsterzebra said:
Have to get my hands on this to expand my Marvel collection..

Can someone help me get one please?

Send me a PM, would be happy to help.
Reactions: monsterzebra

I just bought this, even though the movie wasnt brilliant, i actually didnt mind it.
Show hidden low quality content

Digibooks/Digipacks, Mediabooks Sunday at 8:50 AM
Robles