Prime 1 Studio is unbelievably proud to finally reveal the most earth-shaking piece in the Ultimate Diorama Masterline Series: the non-scale UDMGVK-03: GODZILLA VS KONG FINAL BATTLE from Godzilla vs. Kong! Calling all Prime 1 Studio fans! Team Godzilla and Team Kong folks will have to set aside their differences and agree...this is the ULTIMATE Godzilla vs Kong diorama! Stare in awe and wonderment, as Prime 1 Studio has created the most amazing battle diorama ever created! Godzilla, King of the Monsters goes head-to-head against Kong, King of Skull Island in this lavish Hong Kong nightscape for the ages! 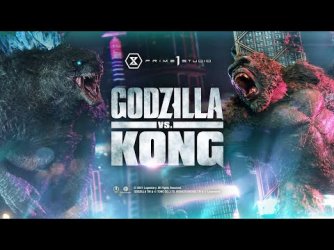 Who you got? Godzilla or Kong?