You are using an out of date browser. It may not display this or other websites correctly.
You should upgrade or use an alternative browser.
Added to Calendar: 09-29-20 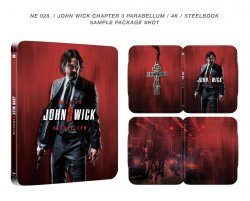 Last edited by a moderator: Sep 18, 2020
Reactions: MM3, GeoRattray, jonnybobbytimmy and 2 others

This is Nova Media.
It's been a long time since we announced the release of NOVA EXCLUSIVE in addition to the announcement of the release of <1917> and <Dark Waters>.
NOVA EXCLUSIVE #26-28 will be released in 4K UHD versions of <John Wick> 1,2,3 in order.
At first, we were worried about the release due to the high manufacturing cost of steel book package, the difficulty of producing 4K UHD in Korea and the production cost. However, since there is no doubt that it is a work that many collectors(including us) love, we decided to make it as a 4K UHD exclusive steel book.
We will let you know the detailed package specifications later, but basically the 4K UHD 1 disc (including the supplements) will be released as full slip and lenticular full slip for each title.
Pre-orders and release dates are scheduled every other month, and the first pre-order will be made in July.
In the near future, we will inform you of the pre-order with more details.
With launch news today, we are releasing <John Wick> 1,2,3 UHD EXCLUSIVE steel book package shots. Hope everyone is interested.
Thank you.
Regards, NOVA MEDIA
Reactions: SourceD, jasong, milky and 1 other person

I don't understand, didn't they already release the John Wick trilogy? Are they just making new editions for them with 4k discs?
Reactions: Mararagan

Yes, it seems that way.
But one thing for sure, these babies will sell out like their predecessors
M

I guess Novamedia has their own milking cow now. I guess it makes sense, John Wick is basically their only release that sells out fast and doesn’t end up on the Christmas Sale over the last year or two.
Reactions: BluSteel2012

you cant have enough John Wick edition ...one click

This one is the worst offender. A re-release announced 8 months after the original. Brilliant.
Nova trying hard to go the way of the dodo.

Reactions: MM3, GeoRattray, milky and 5 others

And in case it wasn't clear

Reactions: MM3, GeoRattray, milky and 3 others

DMD4k said:
This one is the worst offender. A re-release announced 8 months after the original. Brilliant.
Nova trying hard to go the way of the dodo.

still this will sell out in few seconds

Excited to see the slips! Hopefully they don't mess them up and completely put me off purchasing these.

TheCollector86 said:
still this will sell out in few seconds

I guess. Here's the recent and future lineup for Nova.

DMD4k said:
I guess. Here's the recent and future lineup for Nova.

i'd one click them all
Reactions: MM3, C.C. 95, goufcustom and 1 other person

I bet you would, even if they were black blank steels.
Nova wasn't doing too hot lately, after this stunt, they're at the bottom of premiums for me. WTH kind of a stunt is this. I was thinking of double dipping and supporting their 1917 WEA, after this, they can go suck a lemon.
Dark Waters... yeah, that's where Nova are at. They can find their way out of this John Wick maze.
Reactions: C.C. 95

DMD4k said:
they can go suck a lemon.
Click to expand...

Reactions: MM3, milky, steelmybeatingheart and 4 others

Noodles said:
Excited to see the slips! Hopefully they don't mess them up and completely put me off purchasing these.

Unless the slips/artwork are great - I will simply buy the 4K discs in standard amaray editions to replace the ones in the Nova Blu ray editions.
(part of me hopes that is the case! Buying entirely new sets just for 4K is not awesome, unless the art and design is worth it).
Reactions: AlienKing and DMD4k