Release date: December 6, 2021
Purchase link: All the Anime
Price: £199.99
Note: The international re-release of NEON GENESIS EVANGELION does not contain “FLY ME TO THE MOON” in any of its home video editions 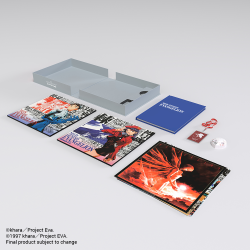 Last edited by a moderator: Aug 20, 2021
Reactions: Grendel and sinusR2

Presented on Blu-ray for the first time in the UK, this groundbreaking, action-packed series from creator Hideaki ANNO has been hailed as one of the most important anime series of all time – a remarkable fusion of genres, and a powerful examination of the relationship between man and machine.

The NEON GENESIS EVANGELION Ultimate Edition was created by fans as the definitive celebration of one of the most important and influential anime series of all time, featuring exclusive artwork, over 5 hours of bonus features, both Official (2019) and Classic (1996) Dub and Subtitled options spread over 11 discs, a 158 page book, exclusive merchandise, and more.

The Ultimate Edition is encased in a premium-quality rigid-board shoulder box featuring artwork never before released in the UK & Ireland. These renderings of Asuka and Rei were previously featured on the Japanese LaserDisc release, and are further accented with a hi-build UV treatment on the title and characters, with micromotion on the LCL around Rei. The set also includes two sturdy fold-out disc carriers featuring LaserDisc artwork of Shinji & Gendo on one with Misato & Kaji on the other.

In addition to the official dub and subtitles, there is an extra set of discs including the bonus classic dub and subtitled version for the twenty-six episode series, as well as the films EVANGELION

EATH (TRUE)2 and THE END OF EVANGELION.

Eleven double-sided 12x12” art boards are a high-quality replication of the full character-based artwork from the famed 1996 Japanese LaserDisc release. Printed on sturdy cardstock, these art boards are ready for wall display or additional framing.

A limited edition resin paperweight modeled on Sachiel, the 3rd Angel. Sachiel is the first Angel to appear in NEON GENESIS EVANGELION and emerges from the sea in Episode 1: ANGEL ATTACK. This paperweight was created exclusively for the Ultimate Edition.

Recreated from its appearance in NEON GENESIS EVANGELION, this double-sided guest ID Card features the NERV organisation logo and includes a sturdy 450mm lanyard adorned with the Magi System’s signature “EMERGENCY” indicators. This ID card and lanyard are created exclusively for the Ultimate Edition.

Including a treasure trove of bonus content from the original Japanese Blu-Ray release, there are over 7 hours of content to be found on the Ultimate Edition on top of the classic dub including:

One of the most complicated anime I have ever seen.
Looks cool though, very nice set

I think it only cost me 155 GBP though on day 1.
Show hidden low quality content