We’re starting off the week with the always marvelous Matt Ferguson and his newest print for Star Wars: The Rise of Skywalker, and details of our first screening of the year--a double-header of Fred Dekker films, The Monster Squad and Night of the Creeps.

The current Star Wars movie trilogy recently came to its epic conclusion with The Rise of Skywalker, and regardless of the torrent of debates over it, we think there’s one thing every Star Wars fan can agree on, and be excited about: Matt’s officially licensed print for the film! Matt’s an absolute Jedi when it comes to Star Wars alternative film posters, and his newest print highlights the current trilogy’s climactic clash.
Matt’s Star Wars print will be available for purchase Tuesday (1/14) @ 12PM ET on our homepage, Bottleneckgallery.com! 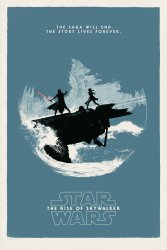 Snagged one of these guys! will go well next to my Rogue One!

@apsmith21 did you get one? since this matches the Rogue One I pulled the trigger

also I think there is a chance he does t his for FA and LJ, the only issue is that Rogue One has credits and this one doesn't

mllNY said:
@apsmith21 did you get one? since this matches the Rogue One I pulled the trigger
Click to expand...

I did not get one, ended up with Dark Rey from Kurtz however to match my other portraits