PUTTING IT TOGETHER: Follow the real-life Discovery crew through preparation, shooting, and posting the second-season finale.

THE RED ANGEL: Go behind the scenes with Discovery's producers and directors, as well as Sonequa Martin-Green and the craftspeople who created the Red Angel and made it come to life.

DESIGNING DISCOVERY: SEASON TWO: On a show where no location exists in our world, the production and lighting design teams must create every space. Learn how they pulled it off.

PROP ME UP: SEASON TWO: Propmaster Mario Moreira takes fans through the world of Discovery props.

DRESS FOR SUCCESS: SEASON TWO: Gersha Phillips and her team discuss how costumes inform a character and how they create a spectacular array of clothing, uniforms, and armour for every kind of species.

CREATURE COMFORTS: SEASON TWO: Producers, craftsmen, and actors discuss the design process, the implementation, and the performance required to bring characters to life. Be sure to watch the one-on-one conversation between makeup artist James MacKinnon and L'Rell actress Mary Chieffo.

CREATING SPACE: There are some shots that just can't be done practically when a show is set in space. The VFX team, headed by Jason Zimmerman, pushes the envelope every week to create amazing computer graphics in order to give fans a realistic feel of space.

STAR TREK: DISCOVERY: THE VOYAGE OF SEASON TWO: A look at the adventures and plot twists encountered in season two by the Discovery crew.
Reactions: RyanD and Felix_ro

terrible season such a disappointment it turned out to be.

Really enjoyed it. Definitely getting this one.

Brilliant stuff.... having been waiting news on this. Great series. Really enjoyed it.

well been waiting for this to turn up to add to season one.
now just need purchase links.

@paulboland and movement with who be selling this yet?

This will be a Zoom exclusive in the UK

Purchase link will be added when live to order 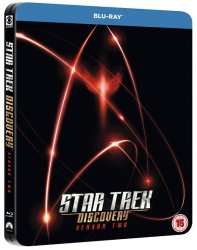 Surely zavvi will have this as they did season 1?

bwatt99 said:
Surely zavvi will have this as they did season 1?
Click to expand...

paulboland said:
It's a Zoom exclusive for now but often Zoom Exclusives some but not all end up available with Zavvi a few months later
Click to expand...

bwatt99 said:
Did not know that which ones have been exclusive to zoom that where not available to zavvi out of interest
Click to expand...

These did not show up on Zavvi later
Groundhog Day
Star Trek Beyond - Lenticular Magnet Edition
Reactions: bwatt99

Buy Star Trek Discovery 2 on Blu-ray with FREE delivery from ZOOM.co.uk - See our full range of other Blu-ray titles.

Ordered.
My first order with Zoom. Should I be worried about their packaging?
They charge the card before dispatch or earlier?

Raimi said:
Ordered.
My first order with Zoom. Should I be worried about their packaging?
They charge the card before dispatch or earlier?

Answered in their FAQs:

https://www.zoom.co.uk/help/faqs
Q | When will the payment be taken for my pre-order?
If you've pre-ordered an item, we'll take payment from your account upon despatch of your order. The only exception for this is if you choose to pay by PayPal, in which case the payment will be charged at the time of purchase (Paypal rules, not ours)
Reactions: Raimi

Silly to pre order at that price from Zoom, Zavvi still have season 1 in stock so obviously not that big a demand for it and knowing zoom they will have it in one of their sales at some point for half that price or less, better taking the risk and waiting
Show hidden low quality content
You must log in or register to reply here.
Share:
Facebook Twitter Reddit Email Link
Top Bottom