[CONTAINER][MOVIE1]Title: The Secret Life of Pets

Tagline: Think this is what they do all day?

Plot: [PLOT]The action comedy is set in a Manhattan apartment building. After the two-legged residents head for work and school, their pets gather to start their day, which consists of hanging out, trading humiliating stories about their owners, and helping each other work up adorable looks that will lead to more snacks. The head hound is a quick-witted terrier rescue (Louis C.K.), whose position at the epicenter of his master’s universe is suddenly threatened when she comes home with Duke (Stonestreet), a sloppy mongrel with no polish. The two soon find themselves on the mean streets of New York, where they meet the adorable white bunny Snowball (Hart). It turns out that Snowball is the leader of an army of pets that were abandoned and are determined to get back at humanity and every owner-loving pet. The dogs must thwart this plot and make it back in time for dinner.[/PLOT][/MOVIE1][POSTER1] 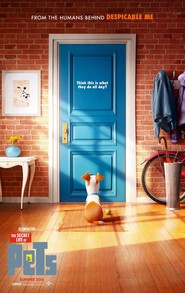 Thanks for the thread @Drum18!

I saw this trailer last week and I'm seriously looking forward to it! 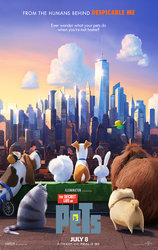 I worked on the first trailer with my pupils, I'm pretty sure 50something pupils + their whole families will go to the cinema. I saw this last night. It's quite fun. The first ten minutes are pretty much everything from the trailers. I was surprised how much I enjoyed the 'story.' A lot of cute, funny moments.
Reactions: Drum18

Finally saw this and it's pretty funny. Is it the best film I've ever seen, no but it was pretty cute and throughly enjoyable, loved all the wee characters.
Does anyone know if there is to be a UK steelbook?
Show hidden low quality content

The Great Outdoors - In theaters TBA