Make your own judgment. That’s what I say of this film. Many folks have bashed this film but I for one thought it was awesome. My feelings are not derived of the fact that I agree with every word spoken out of Mike Chadway “The Ugly Truth” show host. Chadway is played by Gerard Butler of 300 fame. More so my feelings come from that of a witty raunchy semi romantic comedy that made for a very fun viewing with the Mrs. It was fun, it was playful, it was funny, it was raunchy and an overall great experience so long as you go into this one open minded. This film is an absolute treat for a date movie or viewing with the significant other. Why? Because it’s something I thought would never come to be, a rom-com that both men and women can appreciate! You won’t feel embarrassed talking about this one with your mates, friends, homeboy’s etc. 🙂 You can let the macho wall down for this one fellas.

I’m not going to spew off and spoil the goods in this one but let me at least break down a jist of what this film is about. Abby Richter (Katherine Heigl of Knocked Up & Grey’s Anatomy fame) is a television producer who is looking while not looking for Mr. Right. Her production assistant lives her dating live vicariously out through Abby in which she then sticks her nose and tries to help, to Abbey’s approval. A date gone wrong is shown early on where Abby has a list of criteria one would need to meet. Later that night Abby turns on the TV only to see Mike Chadway host his show “The Ugly Truth” where he explains what men really want and what women do wrong. An outraged Abby calls in to give her two cents and the ratings soar. The next day at work her boss tells her how they plan to bring “The Ugly Truth” on their station and Abby despises the news!

You can probably see where this is going, the two (Butler & Heigl) butt heads and as Chadway over hears one of Abby’s conversations with a possible boyfriend a deal is struck. If he can land her this man she has to back off, but if he cant then he will quit. For any rom-com this would indeed give away everything for the remainder of the film and the plot itself, but with “The Ugly Truth” (movie) it comes with so many more fun moments you tend not to think about what is going to happen next and just roll with the punches. And roll you will with many hilarious and outlandish pranks and scenes soon to come!

There’s a lot more to be said but saying it will bring myself to dive into each selected scene and speaking of all these would truly ruin some of the shock/surprise factor you get from viewing it the first time. Plenty of laughs in this one folks, if you dont mind raunchiness, you’ll surely enjoy! This one is definitely my favorite rom-com this year.

Video Quality on The Ugly Truth is anything but UGLY! This one here is 5 star folks! I’m sure the guys and gals agree with the eye candy scenes in this one. 😉 The Ugly Truth has portrayed absolutely stunning attention to detail. This transfer showcases immaculate color reproduction. No grain whatsoever, not even intentional for those haters of grain. Well, no grain to the naked eye or my set haha. Great job on the directing as many vibrant colors play throughout with a great shine and add alot of depth to many scenes. Absolutely fantastic transfer to Blu-ray, a 5 disc coveted rating here at BRC! 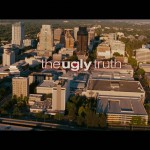 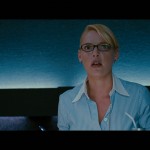 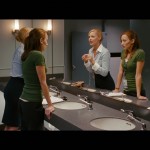 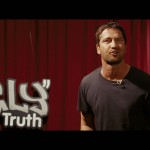 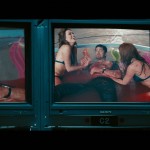 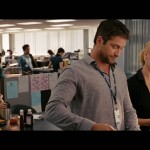 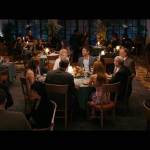 The Ugly Truth comes packing with a DTS-HD Master 5.1 lossless audio soundtrack that amazes compared to any title in its genre. That being said, don’t expect your bass to rock the room as this is a raunchy romantic comedy where music scores and dialogue shine. Stunning sound is precisely demonstrated in the scene where Abby (Heigl) and beau attend the baseball game. The immediate eruption from the fans in the stands sounds exceptional. There is strong reproduction across all speakers with great clarity throughout the entire viewing. The film has a great choice of soundtrack scores to fit the scenes which make it all the more enjoyable. Top notch audio here folks.

Great amount of supplements come packed on this disc for the The Ugly Truth. PS3/PSP owners will salivate at the fact that Sony Pictures has now included a digital copy for the PSP! This has just been introduced with the film Godzilla and as you can see is now making its way onto other Sony titles. Big thumbs up to Sony for that one! Disc 2 has the traditional digital copy for use in your cpu. The deleted scenes are hilarious and worth a watch, check out the iguana! Gag reel is a plus too.

Well here it is folks, the part where I tell you whether its good enough to merit a purchase or rental. What will the truth be for the The Ugly Truth you ask? The truth is this film does indeed merit a purchase if you like or can stand raunchy humor. So what is my defintion of raunchy humor you might ask? Simpy put, their is verbal lines and mimmicking of blowjobs, and many words such as cock and douche being shared around with ease. I believe that alone can describe why this film can be considered a raunchy rom-com. On top of which is a reason why I say finally they made a rom-com that men will enjoy too. 😉

The picture quality is incredible and the sound quality is top of the line for genre, what more could you ask for? A great deal of supplements and eye candy all the while throughout make this an enjoyable watch and something you would watch again within the year unlike most films in your library you dont want to watch until you’ve forgotten the thing! Wonderful release to Blu-ray from Sony Pictures, highly recommended, and that is THE UGLY TRUTH!