Man, what a heartfelt story! The boys really went all out on this one with superb writing that pulls at your emotional well being. Haha. There have been tons of animated films these days with the huge success they have garnered both at the box office and on home video, but does that make them good? Granted most original films have been very good which then spurred sequels that have been more so lackluster compared to the original. Which begs the question, where does UP relate in this category? What sets UP apart, or is any different and will it more than likely suffer the same fate? My opinion is no, it wont suffer the same fate. Why you ask? Because UP provides more than just the simplistic adventure with witty one-liners which we are already accustomed to seeing in animated flicks these days. UP provides a heart wrenching story, creative imagination, comedy and just an overall fresh feel with a 78 year old man as your would be hero!

UP takes you on a ride up, up and away as you follow Carl Fredricksen for an exciting adventure. The long time balloon seller decides to risk it all when forced to move into a retirement home. Carl attaches thousands of balloons filled with helium to his house out through his chimney to take him on his journey in search for Paradise Falls in South America. So what could go wrong right? Suddenly, a stow-away has been discovered in 8-year-old Wilderness Explorer Russell. Russell is set out to obtain his Elderly Assistance badge for his cub scouts, but even he didn’t realize it would lead to this! The two embark on an enthralling adventure in the jungles of South America and run into a lost world with a lot of funny exotic animals of different breeds. From Kevin the exotic bird addicted to chocolate, to Dug the golden retriever fitted with a voice box, UP brings the laughs.

Directed by Bob Peterson and Pete Docter, UP unfolds magically with brilliant storytelling. So much so that many times their isn’t even any dialogue as the musical scores and facial expressions bare the expression. A picture is worth a thousands words. And with Disney Pixar’s UP it truly is just that. Instant classic.

It’s almost always known now that a Pixar movie will garner a 5 disc/star rating, and this time is no different. I really could just say picture quality equals best here and be done with it, because that’s literally how it is. However, I’ll try and go a little in depth on some of the exceptional video quality by breaking down some scenes. The overall success of UP in terms of its picture quality is due largely in part to the visual directors.

There is obvious fine attention to detail when viewing the house of Carl and Ellie as many old folks keep lots of stuff and every single item has rich characteristics. The scenes in the jungle when Kevin first appears shows wonderful colors and pop out immensely with the color selection of the birds feathers. Dug the dog had plenty of rendering detail done to him to make him really another character in the story. And just checking out the clouds alone can prove how realistic it all looks, simply amazing.

Each scene can be broken down with many different warm, vibrant, or eye popping colors. There are even scenes that have been meticulously chosen with perfect contrasting colors that play off each other to fully give that beautiful visual effect. UP is a total masterpiece in the sense of picture quality and should be at hand any time you look to show off your high-def system. The transfer from UP is gorgeous and is total reference material. Videophiles, rejoice! 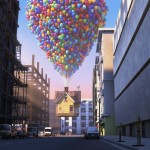 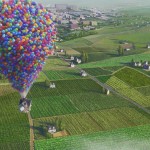 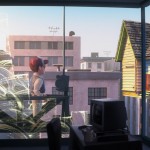 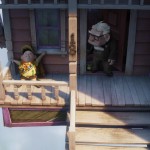 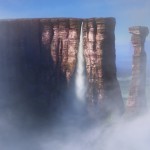 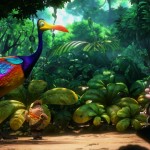 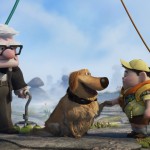 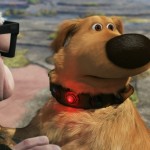 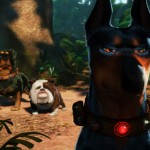 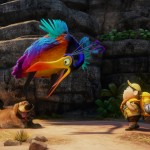 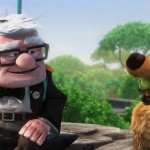 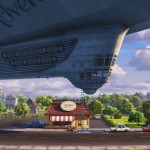 UP comes to Blu-ray with a DTS-HD Master 5.1 audio track. A total engulfment ensues with all speakers being utilized to perfect precision. Sound effects are insane as you hear the every movement of the balloons. Vocal clarity is heard throughout even the louder background moments. All the different environments this film chooses to wonder through showcase such a great naturalistic sound field. Total immersion will take place and make you feel as if you’re on the journey as well. The lightning storm will shake your bass and rock your speakers. The wind will hit all speakers in perfect ambience to set this one apart. Clearly a great tight mix and master has given the vocals on this one just the perfect sense of professionalism. These technicians really know what their doing! Disney must have some of if not the best in the industry. Of course albeit that all animated films should have a lot more time for their voice recordings might be a reason for such a tighter mix. Terrific audio transfer here, 10 of 10, 100%, 5 disc rating!

UP comes to Blu-ray in a 4 disc package packed with loads of supplements, a digital disc copy, and even a DVD. A+ packaging effort derives the high score garnered by UP, I mean the special features are packed on this film, and the DVD & DC are just an added luxury! Amazing!

Adventure Is Out There (HD, Disc 1, 22 minutes): Discussion on the pre-production and development of UP plus the conversing of many sites from Venezuela that are in the film.

The Many Endings of Muntz (HD, Disc 1, 5 minutes): An alternate scene on handling the ending of the films antagonist.

Documentaries (HD, Disc 2, 48 minutes): Very interesting piece focusing on the make up of Carl plus more!

I think if you read this far, you’ve already decided you want to purchase UP or have already purchased UP! Pixar films are the new Disney classics of our kid’s generation. They will grow up and be fond of Toy Story, Finding Nemo, Monsters Inc, Bolt, UP, Wall*E, A Bug’s Life, and many more! No more different than we have been fond of The Lion King, Aladdin, 101 Dalmatians, Beauty and the Beast, Robin Hood, Snow White, Pinocchio etc. The bottom line to this film is that without yet being deemed a Disney classic, it is a Disney classic. The film has top of the line, stunning Video and Audio quality combined with a story both kids and adult will cherish. There really isn’t much else to say, it’s worthy of its purchase! Throw in the fact that is has tons of extras, features, and a digital copy for on-the-go viewings and a DVD for those kids with DVD players in their room basically solidify the value of this purchase. Blu-ray Entertainment Center is proud to give this film our coveted 5 disc rating Bottom Line and strongly suggest adding the Blu-ray UP to your home collection/library. You won’t be disappointed.