Monsters, Inc. has been a title that Blu-ray lovers have been yearning to have since its announcement, and it was well worth the wait! The title got pushed back a couple times and I think Disney underestimated this film’s popularity since marketing had to tie it in with a same day release of Pixar’s UP. Monsters, Inc. has always been my personal favorite and by the hype on the internet surrounding this release I can see it was many others as well. Personally I feel like Monsters Inc. had the power to release on it’s own and at full retail but the sales on these two titles across the states have been tremendous! Thanks!

Monsters, Inc. is a wonderful fresh film that is still a hit today even 8 years after its initial release. Monsters, Inc. is a story involving James P. Sullivan aka Sulley who is voiced by John Goodman, and Mike Wazowski voiced by Billy Crystal. The two of them are scare monsters in the world of Monstropolis where scaring the kids is what fuels the city with energy to keep the city running. According to their myth, if they touch a human they are infected and if not hosed down immediately could die and or get the whole city sick. However, Mike and Sulley find out first hand what happens when their world interacts with the real world when 2-year old baby “Boo” sneaks into the monster world. Drama can be had throughout as the monster Randall is always out to get Sulley as his main competition in the scaring competition and then the investigation of finding the missing Boo. Sulley and Mike uncover a secret scheme involving Waternoose and have to plan secretly on how to expose it all for the safety of Boo and their lively hood. Fun times packed with humor throughout!

Monsters, Inc. is a treat of a film for both children and adults alike and should be in every person’s movie collection. I strongly recommend a viewing of this film if not a purchase as its my favorite Pixar filme to date.

Total Wow! Never have I seen a blu-ray where you literally felt that you could reach out and touch the characters like with Monsters, Inc. The attention to detail on Sulley is impeccable, his fur just comes to life. Granted being an animated film it allows for awesome picture quality, but the decisions on the color palette are remarkable. Monsters, Inc. benefits in its large city scenes with this in mind. Outstanding deep blacks coupled with vibrant colors really make this one come to life. Every etch and crack in the doors in the factory really show the quality of this transfer.

This is total reference quality for any Blu-ray set up everyone will be at awe. Videophiles will go bananas on this one. Once again, like always Disney Pixar doesn’t disappoint. 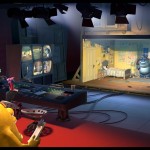 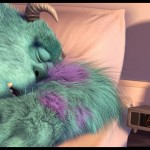 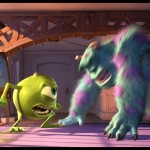 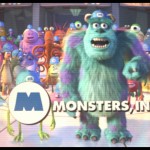 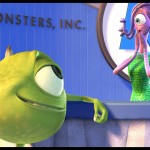 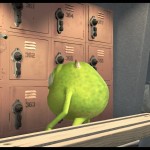 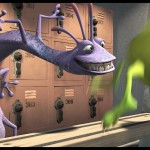 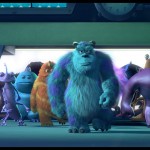 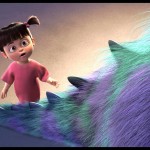 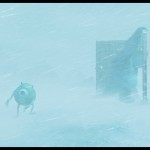 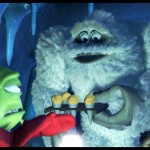 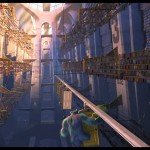 The audio quality on this release is absolutely amazing. The techs provided a wonderful tight mix for its DTS-HD Master Audio 5.1 surround track. From doors banging to Monsters screaming everything is heard to the highest clarity. The speakers will literally engulf you with the way they are all utilized at loud moments throughout the movie. The bass packs a punch too when needed as quite a few times I had to turn it down haha. Once again Disney Pixar out did themselves with this wonderful audio transfer. It’s no secret to audiophiles that Pixar movies are worth the purchase on Blu-ray just as much as it is for videophiles. You will be blown back with this one.

Much like Disney Pixar’s UP the title Monsters, Inc. comes packed as a 4-disc edition too with a nice embossed like slip cover housing the case. This thing is absolutely packed with supplemental material and bonus features. Throw in the ever so convenient digital copy for those on-the-go and the DVD disc for kids room’s and lap tops etc. and it makes for one grand slam of a release. So we know Pixar is damn near pefect in everything with their releases so can there be anything to nitpick over? Sure, SD special features of its 2001 release counterpart. You would of thought a film of this magnitude would of got the total hi-def treatment. Regardless, the bulk of all the features make up for it.

Director’s Introduction: (Disc 1, HD, 2 minutes): Docter appears before the disc reaches the main menu, letting viewers know what to expect with this new release on the blu-ray disc format.

Filmmakers Round Table: (Disc 1, HD, 22 minutes) An exceptional piece well worth the watch for some conversational Pixar moments and nostalgia.

Ride and Go Seek: Building Monstropolis in Japan: (Disc 1, HD, 12 minutes) This here is a look at building and showcasing the Monsters Inc. Ride and Go Seek adventure in Toyko Disney Land. This wasn’t here when I went 12 years ago ?. Understandably, haha.

For the Birds: (Disc 1, HD, 3 minutes) This is a funny short of some mean birds.

Banished Concepts: (Disc 2, HD, 10 minutes) A showing of five abandoned scenes that start with an introduction by co-directer Lee Unkrich.

Set Dressing: (Disc 2, SD, 3 minutes) A showcase on bringing some of the Monsters to life.

Location Fly around (Disc 2, SD, 7 minutes): This feature showcases a 360 degree of some of the films streets, rooms, and locations. Pretty cool tour but wish it was in HD.

I don’t believe you’re blind, but if you haven’t been paying attention you will see that this title got an all around 5 disc rating in every category. That means this is a must own! Monsters, Inc. is a gem of a film with action, comedy, and drama all rolled up into one awesomely animated piece of eye candy! Another Disney release, another quality transfer to Blu-ray disc format. Much like UP, Monsters Inc is a definite show-off of your hi-def system. If you want good video quality, audio quality and a bulk of extras than Monsters Inc. is one helluva purchase. In fact, I think that at the current prices for this title your definitely coming out on top. Everything about this release is top notch, even down to the packaging. Blu-ray Entertainment Center highly recommends the Monsters Inc. Blu-ray.