I must admit, I thought this was going to be a snooze fest. How wrong I was, Julie & Julia is a tasteful treat. No pun intended. Meryl Streep’s character was annoying but at the same time amusing and interesting. It must have been a hell of a feat to accomplish such character detail in Julia Child. On the other hand, I’m not too surprised since we are talking about one of the best female actors of our time.

Julia and Julia tells the story. Scratch that, Julie and Julia tells the stories of two different cooks from two different time periods. The story of Julia Child the infamous cook begins in France during 1949. Where as the story of Julie the phone answering associate for an insurance company takes place in 2002. The directing is phenomenal how he is able to interweave two stories together and conduct them flawlessly. It isn’t until that I’m writing this now that I truly sit back and think of that feat and how great and fresh it really is. I’m not talking about weaving stories together like Vantage Point. I think Vantage Point’s disadvantage (Again, no pun intended) is just that there was just way too many stories and things going on trying to be weaved together. Sure that was done on purpose and wanted to leave you guessing but it was predictable from the start. Julie’s story is a play-on to Julia’s story and going back and forth with only one other storyline really makes it easy to follow and leaves you hanging each time the film flips to other’s story. Brilliant.

This film follows two true stories based decades apart. Julia starts out as a house wife abroad following her husband around as he works for the US government in the US Embassy in Paris, France. Previously they were in China and in time they face more traveling due to the nature of his job. Julia takes up cooking lessons at a masters level in a culinary arts school in Paris and falls in love. Meanwhile, in New York Julie is tired of the rat race of fielding all the depressing calls at work and comes home and cooks to take her mind off things. Upon her husband’s advice he mentions she should start writing a blog. Which of course ends up happening, but to what base. She sets a goal for her self, to cook all 524 Julia Child recipes within 1 year.

Back in France in 1949 albeit Julia whizzes through her cooking classes and everyone she comes across loves her cooking. She pairs up with two friends and begins helping at writing a cook book for American women on French cooking. The rest of the film follows her troubles and hassles along the way as well as her success and personal life. Where as in New York we follow the journey of the year long Julia Child cooking fest to be had in the small apartment of Julie’s.

Julie looks back at Julia Child’s cookbook and TV shows for encouragement as her tribulations contine onward as she makes a success out of her blog and gains plenty of followers. There is drama to be had, and comedy sprinkled within. A very fun film for a lover of all genres. Especially with the misses. 😉

Sony brings you Julie & Julia with a 1080p transfer in a 1.85:1 framed transfer that simply gets the job done with an amazing transfer. Just like the movie you may not really realize how good of a transfer this is until it’s over and you’ve had time to reflect. There isn’t a lot of eye popping colors or vibrant mixes but the sense of realism and exceptional warm color tones can be seen throughout. Stunning attention to detail through every nook and cranny. From the furniture to the clothes to the taped shows shown on the small Sony TV in Julie’s apartment the film has a great reproduction of detail that fits the movie well. Kudos. 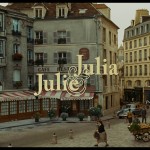 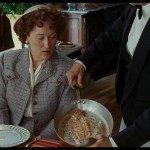 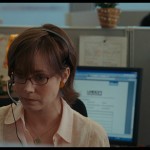 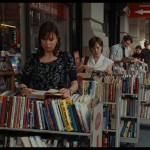 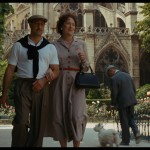 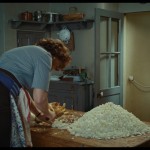 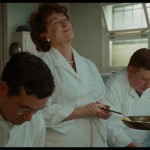 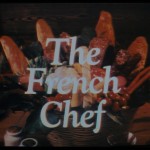 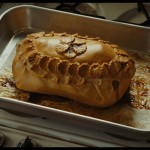 I’m not going to deduct from this film for not having earth shattering audio, as it just didn’t require it. This film’s audio track is rich with dialouge and within that realm it presented that greatly with it’s 5.1 DTS HD Master track. I know they say dont judge a book by its cover. And the same could be said with movies, but if you honestly thought that your bass would be pushed to the limit by looking at this cover then you need to have you head examined. This film proabably could’ve been fine with a dolby digital track but the HD Master track does shine during the musical scores throughout. So with that, I applaud Julie & Julia in that sense since it was given a more than fair treatment that critics of the film can enjoy willingly.

Julie & Julia serves up a very interesting supplemental package for those who enjoyed the film. A commentary track a long with plenty of featurettes make this a very cool package to sift through. Besides the interesting peices the coolest feature is probably Sony’s MovieIQ as it allows the user to see notes and information about the film and even going so far as to allow you to enter your email address and get Julia Child recipes sent to your email address if chosen during the scenes that corresponds.

Commentary track with Writer/Director Nora Ephron – Interesting peice on the making of the film and the struggles of combining two stories into one plus much more.

Secret Ingredients: Creating ‘Julie & Julia’ (1080p, 27:44) – One of the best making-of I’ve seen in a long time. A fun watch of plenty of intricate details of the film’s process of becoming what it is now.

Cooking Lessons (1080i) – Features a lot of cooking lessons of some famous Julia Child dishes.

I’ll say this first off, this film isn’t for everyone. If your not in the mood for this film then you may want to hunt me down and exchange some not so nice words. Haha. However, for those who have read the summary of this film, and still find this interesting then this film is definitely for you. I found it to be a nice hidden gem since it’s not something I would have checked out otherwise. Great directing and flawless integrated storylines with superb acting really allowed this one to shine. I’m also a sucker for true stories. This is one that is definitely for adults and so long as you go into this one knowing just a tad as to what to expect you’ll enjoy it. I even wanted to know more of the story when it was all said and done. The video transfer doesn’t pop but it follows the warm color tones of the movie well and has no poor instances. High attention to detail. The supplement package is very interesting and the audio track does its job well. This film comes highly recommended for those already out on a limb about the purchase or rental. Bon appétit!

7 thoughts on “Julie and Julia Review”