2012 was an epic blockbuster that many critics bashed, but for many folks who like disaster movies it serves its purpose as a great popcorn flick. Just thinking of the proposed plot to be its going to be hard to accomplish such a feat in a completely serious manner following a cast of characters around without having to sprinkle in the dash of comedy here and there and at times cheesy storyline. Let me hear how you can destroy the world in a timely manner that can still be centered around a cast and last 2+ hours in an epic disaster setting. 😉 Not the easiest task at hand.

From Roland Emmerich, the director who brought you “Independence Day” and “The Day After Tomorrow” comes his next disaster movie entitled “2012”. 2012 derrived of the Mayan myth that the world would end in 2012 and thus the movie has no real correlation but still works off the same hype.

The film stars John Cusak as an author by the name of Curtis Jackson who is divorced from his now ex-wife that he gets visitation rights for his kids. Curtis takes the kids to go see yellowstone when he stumbles into a blocked off area from where the US government is doing testing due to the fact that the Earth’s core is heating up rapidly faster than expected (As they knew of this 2 years prior) and soon the Earth would have insane earthquakes that would tear the world apart.

On the same hand, you follow the workings of The President of the USA played by Danny Glover and the scientist who has discovered this and predicted this to happen at a later date. In preparation to this event they along with other major countries had been working on arcs that would withstand the massive tsunami’s and allow them to ride out the armageddon to then restore humanity. Politics come into play with the who’s who list of who all has a ticket for the arc and so forth. All in all, its a good movie but not the greatest nor no “Independence Day” in my book. However, for those who like disaster movies and want a good flick to watch for the evening it can definitely entertain.

2012 lights up the screen with its 1080p, 2.39:1-framed transfer. These days with big time blockbusters you just assume you are going to get magnificent video quality transfers if the movie it self oozed with CGI … and don’t get me wrong, the film has a GREAT video transfer but I was a little shocked as I expected a little more. However, maybe I’m glad I didn’t get that “little more” as it didn’t seem to pop and be overly vibrant in colors to me, and I guess now that I have time to reflect back on it I’m pleased with what all it did do. It actually made the CGI look a tad more real and sharper by not making it insanely vibrant like that in films like Surrogates for instance. Trust me, I know I’m rambling but I hope you get the point. I think it could have been a little bit sharper without going overboard like many films today do, but that’s just me nit-picking. You will be more than pleased with the video quality on this one and those with 1080p set ups are in for a treat. There is a couple scenes with a small bit of grain but nothing overwhelming or unintentional. 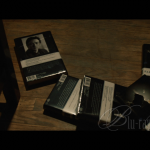 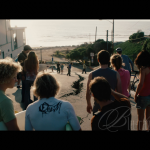 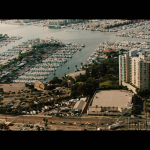 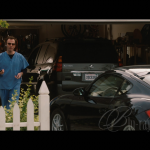 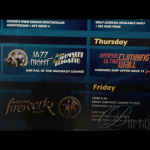 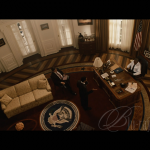 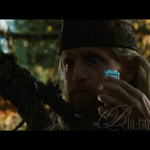 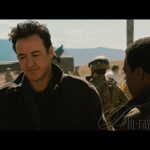 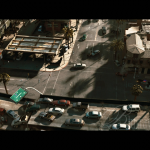 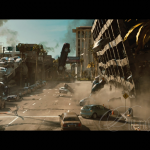 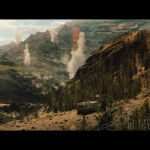 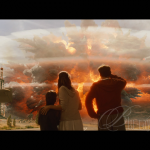 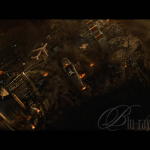 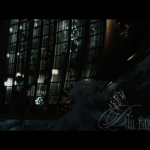 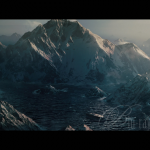 2012 bangs its way onto blu-ray disc with a lovely DTS HD Master 5.1 lossless track. Any audiophile really shouldn’t be surprised for 2012 to have one hell of a track due to the simple fact that it’s a disaster movie. That being said, it was expectant to have loads of destruction, bangs, booms and bams that would rock the house to the core. The subwoofer has tons of play most obviously, and the rest of the speakers will engulf you with its rich attention to detail HD audio. The cracks in the cement rip through your speakers and crashing sound effects are absolutely flawless as the cities come crashing down. It’s so real, that its often more times sad when you really step back and take it all in. However, so long as you take this one to light to heart you can have some amusing fun watching everything get annihilated. Audio dialogue quality wasn’t put on the back burner either as it’s top notch and very tightly mixed for a crisp representation. A+

2012 absolutely stomps its way onto blu-ray disc in the supplement department. Packed in a 3 disc package case about as thick as the Monsters Inc 3disc edition (if you can remember that one, or have held it in hand.) its packed with extra features. Disc 1 contains the film and a few supplements where as disc 2 is nothing but supplements an even a PSP digital copy for this with the capable device. Fear not cpu and ipod users, disc 3 contains the mac/pc digital copy.

Audio commentary featuring Writer/Director Roland Emmerich and Co-Writer Harald Kloser: Tons of 2012 knowledge and facts and loads of interesting tidbits but it suffers from a more than stale/boring presentation.

Picture-in-Picture: Roland Emmerich’s vison, obviously this is a really cool feature that most will find entertaining and adding a good bit of originality towards the title. Show casing the special effects and cast interviews all while in a P.I.P box. Thumbs up!

1080p trailers for Angels & Demons, Armored, The Imaginarium of Dr. Parnassus, Planet 51, and Did You Hear About the Morgans?

Also included is the Interactive Mayan Calendar: (1080p) Mysteries of the Mayan Calendar gives viewers a look at how the Mayan’s calendar system works. Myan Horoscopes provide future horoscopes for those who enter their info. A legend allows for an easy user interface. Also included is a Mayan Personality Profile allows users to see their character traits based against the tzolk’in calendar

Designing the End of the World: (1080i) A lenghty feature showcasing the struggles, challenges of performing with green screens etc. for special effects.

Science Behind the Destruction: (1080i) This should have played out before the movie. It basically shows the science behind what the movie was about.

The End of the World: The Actor’s Perspective: (1080i) a small peice on the cast and their attributes that they brought to the table.

Roland Emmerich The Master of the Modern Epic: (1080i) Shows the cast complimenting the man and his vision of the famed movie director.

Countdown to the Future: (1080i) a lengthy peice showcasing the importance of the year 2012, it’s myth, and the possibility of it coming true.

“Time For Miracles” music video by Adam Lambert (1080i)

The making of the “Time For Miracles” music video (1080i)

1080p trailers for By the People: The Election of Barack Obama, Breaking Bad, Close Encounters of the Third Kind, and Michael Jackson’s This is It.

The third disc (Yes, the third disc even though the case advertises this as a 2 disc collection.) contains the standard digital copy that can be used in either a mac or pc.

2012 thrusts it’s way on to blu-ray disc format in high end fashion. The film is offered in a 3 disc set (along with a 1 disc if that all you want to purchase) with loads of special features and a digital copy (2 in fact). The film has one of the best audio transfers on blu-ray to date and although some will disagree the best of 2010. The video quality is of exactly that, quality. It will more than likely drop your jaw on a number of occasions due to the sheer destruction the film exhibits and in beautiful high definition its hard to remember that its all fake. This set is loaded with supplemental features that are sure to please the fans and the movie albeit had some cheesy moments its overall a great disaster flick. Don’t get caught up in all the hype and you will be able to enjoy this movie more than many, as I certainly did. Hats off to Sony Pictures on a wonderful and quick transfer to Blu-ray.