Toy Story is like the pinnacle in the realm of Pixar movies. The one that started all the madness. It’s hard not to like Toy Story especially if you were around for all the movie theater buzz and appraise it got back in the day. It’s also hard to believe that this film has had a release on VHS. Yes, Toy Story is that old! It’s also amazing how many other animated movies have found its way to blu-ray yet Toy Story has taken this long. Granted, its largely due in part to the studios loving to play off the home media buzz and roll right into theatrical buzz and the theory has proven well time after time. Thus we have our reason of why this film, and its counterpart Toy Story 2 have taken so long to make it to Blu-ray; the soon to be in theaters Toy Story 3.

Toy Story is a remarkable story starring Tom Hanks as a voice actor for character Woody, and Tim Allen for character Buzz Lightyear. Innovative during its time, and still cherished today Toy Story set forth a foundation for many of our animated classics of the past 10 years.

Toy Story in a nut shell is about a little boy named Andy who loves to be in his room, playing with his toys, especially his doll named “Woody”. However, what do the toys do when Andy is not with them, they come to life. (sounds like Night At The Museum eh?) Woody thinks he’s got it good. But he must worry about Andy’s family moving, and along with the other toy’s Andy’s upcoming birthday party. Low and behold the new toy is in town, given a last minute surprise gift to Andy from his Mother. Buzz Lightyear, a toy oblivious to the very fact that he is a toy, but he quickly becomes Andy’s new favorite toy. Woody, gets consumed with jealousy, and tries to get rid of Buzz. Although it doesn’t take long for them both to get lost and learn that they need to work together to get back to Andy before he moves without them, but to do all this they must get past the vicious toy killer, Sid Phillips.

The video quality is nothing short of impressive, Disney Pixar’s 1080p transfer is true to its form. Being an animated film you can pretty much guess that its spectacular, but also due to its age and fact that it pretty much pioneered all the CGI animated films you see today you can see the age in it. Many times I thought it could have been a tad more eye popping but I think it was merely the fact that their was a lot of shadowing in scenes that overcast the shades and what have you. The details on all the toys are sharp and Buzz lightyear’s intricate details just glisten and shine like a freshly mopped floor. There are a few flat moments but seriously nothing to whine about. In fact, I shouldn’t even mention my perspective on that as this truly is a videoholics wet dream. 🙂 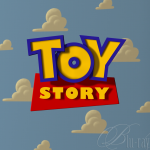 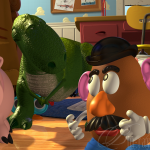 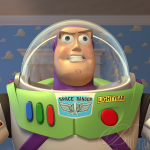 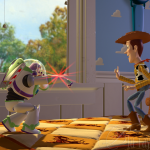 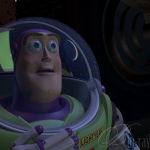 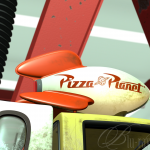 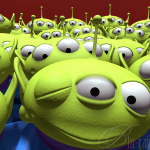 Toy Story comes to you with a DTS-HD Master Audio 5.1 track that suprisingly packs a little punch to it. I was expecting for clear dialogue reproduction that was tightly mixed and mastered, which I got. However, I wasn’t expecting for some room shaking bass. Which I also got. They truly did a wonderful job with the audio transfer and everything tight and crisp. It’s alot easier to babble on when things aren’t up to par or attrocious for that matter but in the case of this title it’s perfect and handles all its feats with ease. Audiophiles rejoice.

Toy Story packs a beast of features that is sure to please any Toy Story or Pixar fans. Granted a lot are of the DVDs past but they definitely had the room to fit them on the disc so why not! Nothing bad to say here, amusing, appealing and fun to watch.

The Legacy of Toy Story: Sweet peice on the the legacy that Toy Story has created with commentary from legendary directors George Lucas and Peter Jackson.

Designing Toy Story: A look into the design in Toy Story and its CGI.

Deleted Scenes: A slew of deleted scenes including some different variations to some fan favorite scenes.

Toy Story 3 Sneak Peek: (HD) One of two new sneak peeks at the soon to be blockbuster summer smash.

Paths to Pixar: Pixar artists share an amusing piece with interviews with their time during and creating Toy Story.

Black Friday – The Toy Story You Never Saw: 8 minutes of HD content of film you have never seen.

Making Toy Story: Self explanitory in the sense that Lasseter gets to voice his input on the entire design process.

Design: A lengthy peice of 3-D visualizations and more.

Story: The Green Army Men are back in a cool peice along with other features.

Production: A few behind the scenes tours and more. Really interesting peice here thats worth a look.

Music & Sound: The “You’ve Got a Friend in Me” music video plus Newman audio tracks.

Seriously, did you really expect to get this far and not get totally recommended on this title? A pixar classic such as this probably has a bunch of ghost readers because you all have already ordered or purchased it. However, if you dont already own this title then I strongly urge you to order this title along with Toy Story 2 to save some extra dough and be pleasantly pleased! Top notch Video and Audio Quality combined with great voice acting from Tim Allen and Tom Hanks and a plethora of supplemental features make this title more than worth it. Throw in the fact that they both contain movie cash for this summer’s Toy Story 3 and you got yourself a sure fire hit. Case in point, BRC recommends it. Enjoy!