Tombstone is a classic, no matter what anyone says. If you dig western flicks, then you probably know of the already highly acclaimed movie, Tombstone. If your a young’n and haven’t had the chance to enjoy the 93 western then you are in for a treat. The film was surprisingly at the helm of Kurt Russell who stars as the main character Wyatt Earp. Along side Russell is Val Kilmer who portrays probably one of his best roles in his weathered acting career, Doc Holiday.

This is one film I’ve been waiting for its blu-ray release for a long time coming. It’s hard to believe that the movie is almost 20 years old. As of right now I’m in Arizona on business where most of this movie was filmed. Funny enough, I visited Sedona and ate at a small BBQ joint and sure enough right there on the wall was the cast of Tombstone hanging there with the popular street walking scene of Virgil, Wyatt, Morgan and Doc all autographed. And now here I am, writing the review. Small world.

90% of the people interested in this movie have more than likely already seen it. The other 10% who haven’t really need to wake up and partake in this fast shootin’ climatic film. I wont dive too much into the actual storyline as most all know it, and for those who don’t I wouldn’t want to spoil it for you. A good sign of knowing when a film is good is when they can make you hate certain characters. You know, like when they make a character annoying and you just want to hate them for that? That is exactly how I feel whenever I have to watch the scenes with Mattie. Just great acting overall and tuff gritty scenes and tight knit gun fights make this film what it is. That and an amazing ensemble for a cast.

The video quality on Tombstone leaves a lot of questions marks floating in the air. It’s sad to see that this film seems to not have gotten the proper treatment in this department as it probably should have. Of course the question is there, who am I to say whether or not it was the best product available for this such title. However, given what it was filmed on and the lighting available being that it is mostly an outside shot film leaves me only with those sentiments.

Unsurprisingly, much like the Robin Hood which wasn’t far from its anniversary so is this title as Tombstone is only 3 years shy of its 20th anniversary edition in which I can smell a rerelease. As for the suckers who buy into it, your looking at one right now. Be it a Tombstone blu-ray steelbook, digibook or collectors edition I’ll more than likely spring for it. It just so happens to be probably my most favorite western film. Dont get me wrong, as it does seem that I’m super disappointed by the video quality on this release it still doesn’t take away the fact that its still an average or slightly above average video quality presentation. I just expected more from such a popular catalog title is all. If your a fan of the film, fear not to let this cast an overall opinion of your purchase of this title. Its good enough, and probably all that you will have on blu-ray for at the minimum of 3 years. 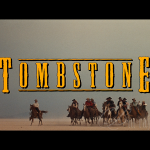 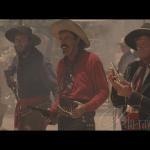 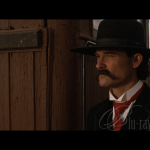 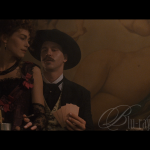 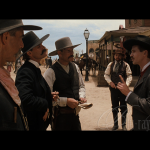 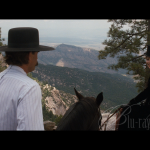 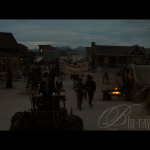 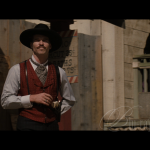 Now as for the Audio quality, here is where Tombstone excels. Probably the best part of this blu-ray release is the nicely upgraded HD audio track that Tombstone bangs on the scene with. With a film like this there is so much potential. The lightning and thunder scene (A pivotal point in the movie which shall remain nameless of what exactly happens for the sake of not spoiling this for any of you folks who actually haven’t seen this out there.) totally rips up the track and the speakers screech from the lightning while the bass obviously rocks your socks off! Another peice of note is undoubtedly any gun fire scene as they just totally ring out nicely over your fronts and center channel sounding almost as if you were there in the middle of the gunfight itself! (Dont turn it up too loud though or the neighbors may call the police thinking there is a shoot out going on. Haha.) Dialogue representation is clear and tightly mixed while the scores and the piano playing in the saloon are nicely heard and the rears get quite a bit of play too. Nicely done.

The Supplements, man o’ man they could have redeemed themselves here but it lacked a few supplements and didn’t try to go the extra mile in the slightest. I guess they are saving them for a future bulkier release. *sigh* None the less, still better than nothing but leaves alot to be desired. The list can be found below.

The Bottom Line, the does this blu-ray merit a purchase or rental? Despite the somewhat bleak supplemental package and a little lacking on the video quality this title still merits a purchase as many folks who love or even just like this movie still have seen it multiple times. The blu-ray will be no different. Tombstone looks better in HD than its counterpart DVD version and the audio quality is absolutely amazing. Since this may be the only transfer we get for three years minimum (possible 20th anniversary edition) unless some other country has a different studio doing the transferring (I’d have to check.) then I’d definitely recommend it. It’s Tombstone for crying out loud, it’s a classic. Even with Gladiator getting totally ripped in the video quality department upon its release it still got recommended and this title is no different. I’m a huge fan so maybe I’m a bit partial but none the less you cant go wrong with this title. Enjoy!