After the end of the Gulf War, four American soldiers (Mark Wahlberg, George Clooney, Ice Cube and Spike Jonze) come across a map in an Iraqi prisoner’s ass when strip searching him that gives the location of a cache of Kuwaiti gold bullion that had been stolen by Saddam Hussain and the Iraqi army. Barlowe, Conrad, and Chief start to decypher the map when Major Archie Gates (Clooney) walks in on a tip about this very map. It isn’t long that the 4 decide to set out to retrieve this gold which they think is hidden in a bunker in a nearby town. The story and plot of this film is that the soldiers set out to retrieve the bullion for themselves, but in the process come to demystify and see first hand the true horrors of the war in Iraq.

“Three Kings” is David O. Russell’s third feature, and at times you wonder what it is actually that you are watching. Is this an action war movie? Or is this a war comedy? O Russell’s skill to tell a story while twisted between in a manner of a war action movie sprinkled with dark comedy is something of awe.

Even with four main characters at the end its clear to see why its called Three Kings as with what they walk away with in return. Intangible wealth. That and the funny spoof that Conrad makes up fits his character perfectly. He makes his tune play off the Three Kings of Orient jingle, albeit that there is four is fitting since his character is that of a dumb redneck who never went to high school.

Three Kings is like fine wine, the older it gets and more times you taste (watch) it; the better it gets! Its still very fresh when all other war films release through the years. There’s been around 10 good war films since the theatrical release of Three Kings yet none of them seem to have the original mix that Three Kings has. If you’re anything like me and love war movies, then everytime you go back and watch this one you’ll find it refreshing and unique in so many ways. Good to have in the collection!

There may have been some bickering in regards to heavy grain in this movie, and I admit there is quite a bit. However there are few times that it seems to be bad as opposed to on purpose for the feel of the movie and or scenes. I’m pretty sure the transfer could have been better, but I still feel it is a lot better than an upscaled dvd. When right, the picture quality pops in all good ways. Colors are deep where they need to be and the grain scenes when intended match the scenery and give the bit of gritty feel that you would have expected in real life during Desert Storm. 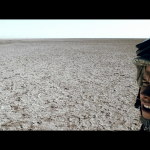 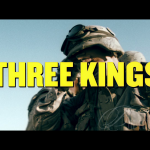 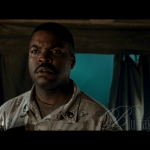 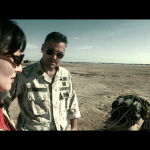 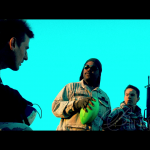 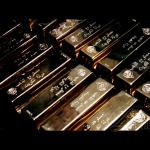 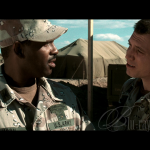 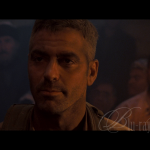 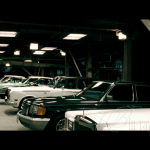 Thankfully, Three Kings does happen to have a great audio track. Packed with a DTS HD Master track the bullet shots ring out! Dialogue is good and has precise clarity as Three Kings is a front heavy track. The center gets a lot of work and bares the load nicely in unison with the fronts. (in my case, the towers) There is a slew of different types of audio in this movie compared to most. You got your typical dialogue, then you got your special effects and sound effects. You got music in quite a few parts, even many coming from a car radio which sounds great. Gun shots, explosions, you name it. This track definitely benefits from the genre of movie that it is and its been mixed tight and mastered great.

Three Kings comes with a nice selection of Special Features, kind of a shame there was no digital copy but it’s easy to get over with the two nice and informative commentary tracks. The featurette is nice too, along with the acting process with Ice Cube. The features are listed below:

Bottom Line TIME! Sure its not the greatest war flick ever, but it sure didnt set out to be. It tells a great story though while placed in that time period of Desert Storm. The movie is overall a good movie and great watch for your first time and you’ll find yourself going back to it many times over the years if you like films of this genre. (War, Action etc.) The video quality while sharp at times also lacked during others. It wasn’t the greatest overall but it was the greatest that Three Kings has ever seen. The audio was through the roof with the DTS HD Master track just rockin’ my home theater. Love it! High clarity, bass, you name it. The supplements aren’t overwhelming, but they aren’t entirely lacking either. A good mix for this title, expect a bit of intended and seemingly non-intended film grain. Other than that if this title interests you then its a good buy. Clooney, Ice Cube, Wahlberg FTW!