DisneyNature: Crimson Wing The Mystery of the Flamingo Blu-ray Review

Disney produced a series of award-winning nature documentaries called True-Life Adventures from 1948 to 1960. Now, after a nearly fifty year absence from the nature scene Disney has made a triumphant return with The Crimson Wing: Mystery of the Flamingos. (2008’s Earth was released on the Disneynature label but was not produced by the company). The film tells the story of the breeding cycle of the African Lesser Flamingo. That doesn’t sound too exciting but the setting, “actors”, and drama all combine to create a film that is not only visually stunning but is also enthralling, touching and at times even heart-wrenching.

Amazingly over 80% of these 2.5 million birds are born on Lake Natron in northern Tanzania. The lake is located adjacent to a rare type of volcano that spouts sodium bicarbonate. The sodium coupled with extremely hot temperatures that speed evaporation, make Lake Natron incredibly salty and alkaline, the most caustic body of water on earth. It is an inhospitable place for almost all plants and animals except the halophilic cyanobacteria that thrive in the lake’s shallow waters. These bacteria produce blue-green algae, the ideal food for flamingos – and what gives them their brilliant pink coloring. The plethora of algae along with the scathing landscape that keeps most predators away, make Lake Natron the perfect place for flamingos to mate and nest in relative safety.

The Crimson Wing has a narration, read by Mariella Frostrup, that is informative and poetic but it merely serves as an accompaniment to the images and sounds that tell the real story. The film does not use any of the cloying anthropomorphizing that has ruined recent nature documentaries. What we get instead are dazzling pictures that speak for themselves. It’s hard to pick a favorite scene but one stand-out is a “dance” performed by the male flamingos as they try to impress their future mates. Not only is it beautifully choreographed but the colors displayed are amazing. It’s truly an incredible piece of camerawork and looks amazing on Blu-Ray.

The film is completely respectful of nature in its entirety – even the parts that can be cruel and ugly. It is for this reason that I must mention that The Crimson Wing should not be viewed by young children; despite its “G” rating and family-friendly cover. This film does not shy away from death. The cameras never cut away as the flamingos are viciously attacked by marauding Marabou Storks, a mongoose, and a hungry hyena. Even more heartbreaking are the tiny flamingo chicks who have been afflicted with salt shackles on their legs, an unfortunate side effect of living on salty Lake Natron. It only happens to a small percentage of the chicks but for those unlucky ones, it is a death sentence. Watching them struggle was difficult even for me. I can only imagine how traumatic it would be for small kids.

Before The Crimson Wing I had never given much thought to flamingos at all. But this has given me such an admiration for these majestic birds. How they can live and actually thrive in such a hostile environment is truly a mystery, a brilliant pink testament to the survival of the fittest. I can only hope that this film will open people’s eyes to the beauty of these animals. They deserve so much more than to be reduced to silly lawn ornaments. I will be looking forward to my next visit to the wild animal park where I can appreciate them in person!

Crimson Wing: The Mystery of the Flamingos arrives on Blu-ray with a 1080p MPEG4-AVC encode framed at 1.85:1. Flamingos never looked better on screen before, maybe they have, but regardless this documentary looks exceptional. Colors are lively with the pinks, yellows, and blues all nicely reproduced. Detailing is stunning, close up shots reveal all the intricate textures of the flamingos beaks, the feathers, the landscape, etc. It’s simply a striking image. Sharpness is spot on. Like many other documentaries, Disney’s Crimson Wing has a few soft shots and a layer of grain that never becomes obtrusive. There is some ringing and some banding here and there, but it is not as annoying as you’d expect. Overall, Disney’s transfer is top notch and does justice to a great documentary. 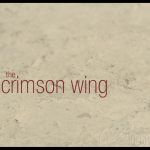 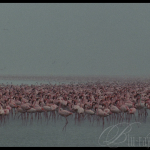 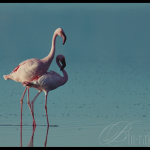 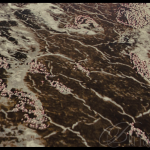 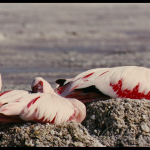 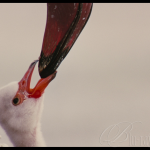 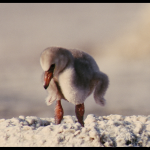 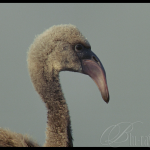 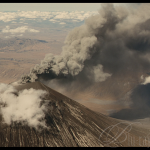 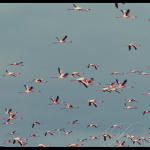 Crimson Wing: The Mystery of the Flamingo arrives on Blu-ray with a 5.1 DTS-HD Master Audio lossless track. Disney couldn’t have done any better than this audio track.
Mariella Frostrup’s voice resonates with quite enough character to lead this documentary and her voice is exceptionally captured by the track. The dialogue is clean and clear at all times accompanied by the beautiful orchestra score playing in the background. The center channel is mostly used for music and dialogue. There are a few scenes in which the sound expands and the audio becomes very engrossing, but for the majority of the time it remains centered. Rears are much obscured, but handle the few effects within the film nicely. Crimson Wing sounds great.

I had really hoped for some featurettes full of scientific facts about the flamingos and the Lake Natron environment. But instead, the disc delivers a lot of behind the scenes footage. It’s good behind the scenes information, but just not what I would have liked best from this release.

Lake Natron Diaries: Behind The Crimson Wing – This is a series of behind the scenes features explaining how the crew lived during the filming. There is also an interesting piece about the music composition. Be on the lookout for one scene where the sun is rising over the lake during a rainstorm and everything turns gold. It’s absolutely breathtaking – but at the same time disappointing because it’s in standard definition!

Living Planet: Explore The Earth In A Fully Interactive Experience! – You can click on little dots around the globe to read nature facts about the highlighted area. A few dots also include short videos about conservation. A note pops up saying that the dots automatically update with new information each month. I’ll have to check back next month to see if it works.

Filmmaker Annotations – This is a commentary track that also includes pop-up trivia throughout the film. I especially enjoyed the pop-ups which included a lot of interesting facts.

The Crimson Wing Screensaver – A collections of scenes from the film with the score playing in the background. This was absolutely beautiful. If I could, I would definitely use this as the screensaver for my computer!

I give The Crimson Wing; Mystery of the Flamingos my highest recommendation. It can be thoroughly enjoyed by all audiences, with the exception of very young children. HD enthusiasts will especially appreciate the film as it is the ultimate Blu-Ray for showing off your awesome TV! Disneynature has made an incredible first impression. I will be waiting with bated breath for their next release. The Crimson Wing has set the bar very high!

One thought on “DisneyNature: Crimson Wing The Mystery of the Flamingo Blu-ray Review”