Of all the “hood movies” This is hands down the best. Many movies try to reflect the daily dramas that are played out in the urban war zones and ghettos of the “Land of the Free”. “South Central”, “Menace to Society”, and several others come to mind. But none of these others can compare to “Boyz N The Hood”.

First off, you have a great, and talented cast. Lawrence Fishbourn is terrific in his portrayal of a hard edged father who tries to raise his son right and teaches him to be a man in a harsh world. Cuba Gooding JR is incredible in his performance (despite a few moments of obsurdity) as Tre, the main character, who is the only kid in the hood to have a positive male role model. Ice cube does very good job as “Dough Boy” the bad ass of Tre’s friends.

The story is also very good and is told well. We begin with Tre as a violent and disturbed young child living with his mother, who is then kicked out of his school for beating up other kids. His mother sends him to live with his father. We then see Tre and his friends grow up and dealing with the problems of young adult minorities in an urban environment.

There are a lot of emotional parts to this movie and it aproaches the subject manner in a pretty mature fashion meant to impress the desparity of the Ghetto as well as what it’s like to try and grow up and survive there.

Just like similar movies there is a significant amount of graphic violence, but I look at it as a more realistic depiction of the story’s setting and characters. The difference with Boyz N The Hood is that it uses violence in a more responsible way, and there is less of it compared to say “menace 2 society”. The violence in the movie isn’t just thrown in for fun or to show you some violence, but instead to impact you.

Also there is a definate message of consequences of actions and the movie stresses the importance of making good choices, and doing the best you can even if the hand you are dealt isn’t the best. In The end Tre prevails and is a good man, despite all the odds stacked against him. Ice Cube makes his acting debut and knocks his part out of the park. In fact, many of these actors were making their debut. Overall its a great hood movie that ultimately focus’ on the true grips of reality of life in South Central LA. This film opened up the doors for all the other hood movies to come later on. Boyz N The Hood comes to blu-ray with the best looking transfer this film has ever had. If you are a fan of this film, then you must own the blu-ray. There are only few instances where the film quality becomes gritty and really isn’t too noticeable. The colors just look overall great, and I’m just glad as I’ve always wanted to buy this movie again as I no longer own it on DVD. You can really see the difference with this title on blu-ray. Plus some of the extras are in HD. 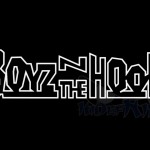 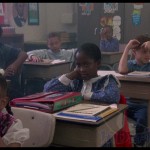 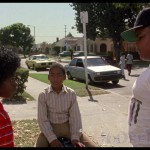 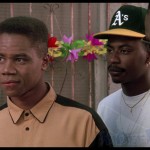 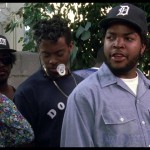 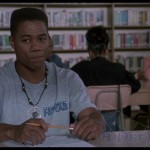 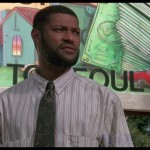 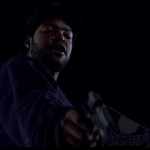 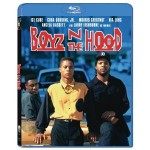 Boyz N The hood on blu-ray comes with a DTS HD Master 5.1 track that more than does the job. With the movie having a nice musical score in the background the audio quality get a chance to shine. However, even more so with the sound effects with cars screeching off, gun shots, and party music. The voice clarity is good and there really shouldn’t be any complaints on this one. Boyz N The Hood comes with the following special features that are listed below:

Director’s Commentary – Director John Singleton breaks it down on this commentary.

The Enduring Significance of Boyz N the Hood – Presented in HD,John Singleton along with the cast and movie producers discuss what this film meant to them at the time of their careers.

Friendly Fire: Making Of An Urban Legend – The original special feature in standard definition for “Boyz n the Hood” with interviews from everyone of importance in the film making process. About 45 minutes. Bottom line. You’ve more than likely already heard of this movie, and if you have then you should know to upgrade your DVD or purchase this blu-ray out right. This film got registered in 2002 to the Film Library of Congress so the quality of the film itself is no joke. It’s even analyzed and taught at some Universities. The picture quality and sound quality are tremendous upgrades to that of the DVD version and the special features carry over with some new material. As of right now, there are no special editions for this movie and it can be had for relatively cheap price on amazon. So go get it! Ninja approved!