I had a chance to interview artist Scott Straka whom I met in Baltimore. He’s a cool guy and very down to earth. His art is primarily horror pieces, but he just does some exceptional work and some of the art was in the gallery after the interview. Thank you Scott for taking the time to do this. I threw some Artist Showcase questions at him and here’s how it went:

Mike: Do you have formal training or are you self taught?

Scott: I am completely self-taught.

Mike: Who in the industry has influenced you the most?

Scott: Growing up with Tim Burton movies, I’d say he has a heavy influence on me. I like taking popular things and drawing them the way I envision them.

Mike: What would your dream character to draw be?

Scott: I love drawing actors/actresses that I’m going to meet and having them sign my artwork. That’s one of the highest honors to me. I had Norman Reedus sign my Daryl Dixon drawing and when I met him he asked if he could put it in his Fan Art Book he has coming out in November.

Scott: It’s hard to pick a favorite, but I’ve always loved the X-Men and Venom.

Mike: You answered X-Men as a favorite comic book; are you a fan of the X-Men movie franchise? And if you had to pick a film, X-Men or Guardians?

Mike: Do you have anything you do to get yourself into the mindset of doing your art?

Scott: I usually have an epiphany that inspires my next drawing and then I get in the zone and start working on it.

Mike: When did you decide that this is what you wanted to do for a living?

Scott: I took a chance and booked my first con, Portland Wizard World, in January as a fun experience and instantly became addicted. So I booked
a few more and once the income was constant and substantial, I quit my job and did it full time.

Mike: Is there, if any, a character you enjoy putting to paper the most?

Scott: I don’t really like to draw the same character twice, unless I start to dislike my old version and want to make a better one. But I’m all about the villians.

Mike: What is the coolest commission you’ve done?

Scott: The coolest request I ever got was to draw a persons four favorite characters like the cover of Abbey Road. I like original ideas like that.

Mike: Is there anyone in the industry you’d really like to meet?

Scott: I have made a lot of friends in the industry so far and that does open a lot of doors for me.

Mike: Have you met anyone in the industry that has made you completely geek out?

Scott: I don’t normally get nervous because celebrities are just people too, but when I sat next to Jennifer Carpenter on a plane, I was just in awe. Dexter has always been my favorite show and whenever I meet someone from the cast I’m just so excited, I’m at a loss for words.

Mike: Any foods or drink you prefer when in the creative process?

Scott: I don’t think there is a particular food or beverage that helps get my creative juices flowing, and I try not to occupy myself with too much other than music when I’m working so I can stay focused because the markers I use aren’t very forgiving. 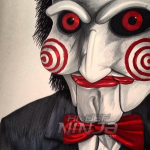 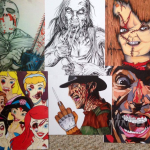 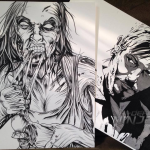 One thought on “Interview with horror artist Scott Straka”