Grey Matter Art has announced their print of THE TERMINATOR!

The creative team at Grey Matter Art has just announced their newest poster of THE TERMINATOR by Gabz. It is the first in a two-poster set including TERMINATOR 2: JUDGMENT DAY by Gabz as well to form a dyptich.

“Doing this project meant a lot to both Jared and I, the moment we were able to acquire the rights to do a poster for both Terminator films. We have always been such big fans of this franchise and to have the opportunity to do a poster for both movies, was an honor. This is our third poster collaboration to release with artist Gabz and we really work so well together. He seems to know exactly what us and other poster collectors are looking for, and delivers every time. I think Gabz depicted this movie very well, and finally gave us the epic Terminator poster we have been waiting for. We hope everyone enjoys it as much as we had making it.”
-Mike

“The Terminator” and “Terminator 2: Judgement Day” are both one of those movies I always wanted to work on, so when Mike Gregory from Grey Matter Art approached me with the offer, it was like a dream come true. I wanted something with strong imagery, action packed, and with a glimpse of the future as seen in both movies. While I’m hoping the artworks will speak for themselves, two things worth pointing out is that the general concept was inspired by an interview with James Cameron I read a while back, in which he stated that he had a dream about a cyborg/robot coming out of the flames, and as we all know the rest is pretty much a cinema history. The other thing I wanted, was to design both posters to form a diptych.”
-Gabz 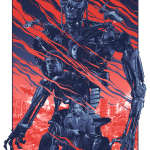 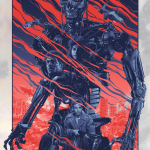 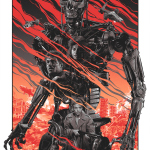 One thought on “Grey Matter Art has announced their print of THE TERMINATOR!”