TALES FROM THE BORDERLANDS Game Review As many gamers out there know, the BORDERLANDS series is loved by so many as one of the best mixes of a first-person shooter and a role-playing game. The TellTale game TALES FROM THE BORDERLANDS is like one of the classic “point-and-click” games from the earlier PC days. It is set in the same universe and after the events of BORDERLANDS 2 but you are following a specific set of characters. It is a five episode game and each one has a decent amount of gaming.

Rhys is one of the main characters and one of the people who you play the game as. He is a smart-assed schemer who was out-schemed by one of his co-workers and rivals at the Hyperion corporation. Rhys, with the help his friend Vaughn, has the great idea to find one of the legendary vaults on Pandora. They head down to the planet and start their quest.

Troy Baker is the voice of Rhys, our “hero” of the story. Baker is a pro at video games and has done so many characters that you probably haven’t played a game in recent years that he hasn’t been in. His sidekick, Vaughn is super-nerd Chris Hardwick who is a little bit of the voice of reason but pretty much does what Rhys wants. As i mentioned, the gameplay is a point-and-click regardless of what platform you play it on. Even on the console, the cursor is easy to move around once you get used to it, it becomes second nature. Obviously playing on a computer is the easiest way to play it but it definitely works on the consoles as well. You get a few options by using a combination of the buttons or the directional pad on the controller. The images from the game have a cell-shaded look that is the perfect style for this type of game. Cell shading is also used by the makers of the first-person shooters in this franchise. For the most part, the movement are smooth but on all three systems (xbox one, Xbox 360, mac) there is some slight chop. To be fair, the chop is from the timer running to choose your answers and the character might slightly move while they wait for you. The coloring is excellent in the upscaled resolution. They really pop and look beautiful. The surround sound in the game is clear and dense with effects and ambient noise. You can really hear it on the planet’s surface. There is always plenty happening in the game to keep the speakers working but it really shines in gaming headphones. In this type of game, the voice work is very important to move the story along.

The Bottom Line
TALES FROM THE BORDERLANDS is a great expansion to the game franchise and to put it in a game that is so different from a shooter was a smart move. It shows that there is still so much story that can be told from the universe that is a mix of the wild west and a dystopian future. The games is available on PC, MAC, XBOX One, PS4, XBOX 360, PS3, Apple, and Android enabled devices. The graphics are pretty sharp and the audio is spot-on. All in all, TellTale did an excellent job.

Have you played it? Have any questions? Let us know in the comment section below! 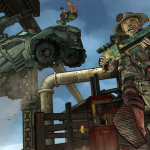 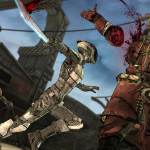 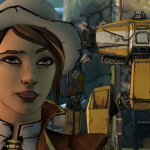