Dr. Stephen Strange is a gifted surgeon who is a cocky and has the god complex. He is driving to a speaking engagement and his assistant is going over potential patients with him. While he is not paying attention to the road, he hits another car and is in what should’ve been a fatal car crash. After hours of surgery, he loses the one thing that is crucial to be a surgeon…the use of his hands.  Frustrated and becoming more self absorbed, he looks for any medical way to repair his hands to get his life back.  Financially and mentally exhausted, he hears about a place in Nepal called Kamar-Taj where he might find help spiritually by the teachings of someone called The Ancient One. Shea takes him in and puts him on the path to his destiny.

DOCTOR STRANGE is the 14th film in the Marvel Cinematic Universe (MCU) and its directed by Scott Derrickson. He has a very strong horror and supernatural background so he fits perfectly into this corner of the MCU.  It has been written by Jon Spaihts, Scott Derrickson, and C. Robert Cargill who also have backgrounds in similar genres so, collectively, they understand the character and his story.  Strange rounds off the last corner of the MCU and opens up a world of possibilities.  As for Derrickson, he has a vivid imagination to use some of the visuals that he has in the film.  He really uses the 3D film capabilities well with the changing foregrounds and backgrounds throughout the film.  Benedict Cumberbatch seemed like a strange (no pun intended) choice for the character but now I don’t think I could see anyone else for the role.  He has the sharp wit, cockiness, and range that the role requires.  Also, seeing him interact with Thor, if only for a brief few minutes shows that he is comfortable with the idea of such a large universe.  I also love that Tilda Swinton had been cast as The Ancient One.  I know a lot of people weren’t feeling it before the film had been released but she fit the role perfectly.  She has a soft tone of voice that is calming and shows that the character does well no matter the situation.

I loved this movie and it might be in my top five for the entire MCU and let me tell you why: Doctor Strange is a character who plays a pivotal role in the entire Marvel Universe in both the comics and the cinematic universe and is arguably one of the most powerful there is.  He has the ability to make a means of travel for himself or a large group like say The Avengers or The Guardians of the Galaxy and that’s helpful for the heroes of earth. They have no fast means of travel on their own so this is why they would tap him for Infinity Wars. 2D Version
The video is a 1080p AVC transfer and it has an excellent look to it.  The imagery overall  is a bit on the dark side and I was expecting the 3D to be darker but I’ll get to that in a minute.  The details are very sharp and do the contrasting justice with very clean lines.  As for the coloring, a lot of the costumes are muted like Mordo having a deep green and Strange with a Cobalt color but they are both easy to see.  The Ancient One’s yellow robe is also muted but it stands out against the grey in the city.  The color really comes out in the dark dimension with the neon colors of bright green and deep purples.  Also, the magic weapons and portals that are conjured have a fiery orange with specs of red that have brilliance.  The skin tones are on the cooler side but they look very natural.  When the faces have close-ups, the makeup is done well enough that it doesn’t look like FX work.  The injuries are subtle enough to look as if they belong there.  All in all, it looks excellent.

3D Version
The transfer on the 3D disc is a 1080p MVC and it has been authored incredibly well.  This film is one of those that doesn’t have to rely on the 3D but wow, does it make excellent use of it.  When the sorcerers are twisting reality, you really get a sense of depth and shape.  There are a few times when some things in the background look a bit flat but these moments are rare.  The video tends to be darker but this is expected in the format.  One of the times where it is very noticeable is in the opening scene.  The shadows and images are muddled and details become lost.  When the objects move from the foreground to the background and vice versa, it is seamless.  I can easily say that next to STAR WARS: THE FORCE AWAKENS, this is Disney’s best 3D release yet. 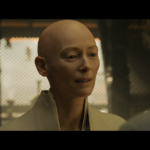 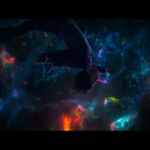 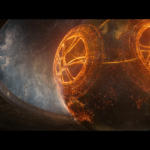 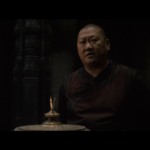 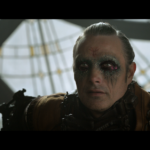 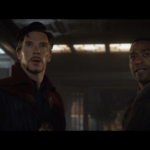 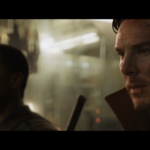 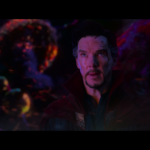 The audio is an English DTS-HD Master Audio 7.1 and it is superb.  The use of the entire sound field is flawless and precise.  The first and possibly best example is when Strange is introduced to The Ancient One and she throws him through the many dimensions.  Her voice is moving around the speakers as he whizzes from one place to the next.  Her voice, along with the effects, is balanced and clear.  The bass is rich and thunderous but very clean.  I would even go as far as to say this is reference quality with how well produced the audio is and how strong it is as well. -A Strange Transformation: This featurette covers everything from the sets and story all the way to how Benedict Cumberbatch prepared for the role.

-Strange Company: This featurette goes into the supporting characters around Strange.  They also explore how they compare to the comics versions.

-The Fabric of Reality: This featurette covers the costumes, set design, and locations.

-Across Time and Space: This featurette continues to explorer the CG effects, practical effects, and stunt work used in the film.

-The Score-Cerer Supreme:  The score of the film was created by Michael Giacchino and this discuses what he did for the tone of the film.

-Marvel Studios Phase 3 Exclusive Look: The MCU is growing and this discuses how DOCTOR STRANGE fits into the already set and the future of the films.

-Team Thor: Part 2:  Thor has taken some well-deserved time off… DOCTOR STRANGE is an astonishingly good installment into the MCU and shows that this character makes sense to get his own film.  It is entertaining with some humor, strong CG and practical effects, and really just fun.  The release is strong in both the audio and video, not forgetting that the 3D in spectacular.  There is a ton of bonus features and they cover everything that you can think of.  Overall, I highly recommend picking up a copy of this film whether you have seen it or not.