WISHMASTER
God breathed life into the universe…the light gave birth to Angels…the earth gave birth to man..the fire gave birth to the Djinn, creatures condemned to dwell in the void between the worlds.

The Djinn have the abilities to grant 3 wishes and the third one will unleash the djinn onto human kind.  In the year 1127 in Persia, the emperor has been granted his first wish.  For his second wish, he wants to be shown wonders and the djinn mutilates the people in his presence.  The scorcher in the kingdom tricks the djinn and traps him within a gem for eternity.

A collector of fine arts and relics buys a statue from the era with the gem sealed inside.  As the piece is being moved off of the container ship, it is accidentally smashed to pieces and the gem is taken by one of the workers.  When the gem is being sold off, Alex appraises it and she inadvertently releases the djinn.  He needs the wishes to be granted to fulfill the prophecy.

WISHMASTER 2: EVIL NEVER DIES
The djinn has been re-released when a crew of robbers accidentally shoot the gem open during a job.  After one of the robbers named Morgana escapes and her partner is left for dead, he wishes to never have been born.  The newly released djinn grants the wish and, as the police move in, the djinn changes form to a shape he was in from the first film…and gets arrested.  Morgana is tormented by visions from the gem but she will need some help to try and makes sense of it all.

WISHMASTER 3: BEYOND THE GATES OF HELL
The djinn has been found again, this time by a student named Diana.  Her professor is confronted by the djinn and he grants his wish, only to turn it around on him and kill him.  He takes the professor’s form and is determined to make Diana ask for her 3 wishes.

WISHMASTER 4: PROPHECY FUFILLED
When an artist named Sam is in a terrible motorcycle accident, he and his girlfriend Lisa decide to hire a lawyer named Steven to fight his case.  Steven has a crush on Lisa and when he senses that the moment is right, he tries to swoop in on her and gives her a jewel as a present.  The jewel is the prison to the djinn and he wants his wishes granted.

The WISHMASTER series is in the horror genre and there have been a few directors who have helmed the movie. The first is directed by Robert Kurtzman, the second by Jack Sholder, the third & forth by Chris Angel.

Ok, so lets have a quick history lesson because I think that where they came up with this idea for the film is very cool.  The djinn, or jinn, is based on the idea of the genie in the lamp from the Persian and early Arabic stories.  As the stories go, they actually are demons and have more of a malicious way about them as apposed to how they have been romanticized in pop culture.

The filmmakers took the legend and made a monster that went to last for 4 films.  The first two are pretty good and the last two are on the campy side.  The other thing that I feel like changed the feel of the films a lot is actor Andrew Divoff, who played the Djinn, was only in the first toe movies.  He gave the role the creepiness that you want from a horror film and your lead character.  He achieves this both in and out of the makeup.  The other successful part of the first two is the make up of the lead and the gory FX.  The makeup on the lead is demonic and nasty but not too over the top.  He looks like he is in armor and not human but is a good twist on the idea of these beings being evil.  As for the FX makeup, there’s an array of inhuman acts and bodies torn apart that looks great. The transfer for all of the films is a 1080p AVC with 4 films over 3 discs. The first two films have their own separate discs but the third and fourth film share a disc.   This is probably why I feel like they suffered from loss of details and edge enhancements the most but I’ll come back to that. All four films are listed as “remastered” with the original looking the best.

WISHMASTER & WISHMASTER 2
The details look excellent throughout the film and even when the shots aren’t that close, you can see small imperfections in the skin.  You can also see the great makeup on the djinn instead of seeing the flaws.  There is a medium grain present that fluctuates a bit.  The coloring is bright but I don’t think it’s as bold as it could be.  A lot of the wounds and gore seems muted and that could be the type of fake blood that was used and not the transfer.

WISHMASTER 2 looks just as good as the first film but maybe a notch or two lower.  There is plenty of detail in the images and the coloring is what I consider to be a definite step up from the DVD version. 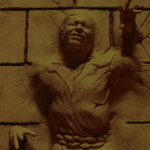 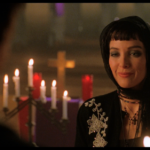 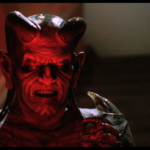 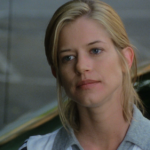 As for WISHMASTER 3 & 4, they look very much the same.  The coloring seems a little brighter but the grain is heavier, to the point of appearing as noise that is always there.  The details are also not as clear with a lot of the lines missing their smoothness. It also looks like they went heavy-handed with the EE, making the edges of the images muddled a bit. 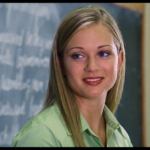 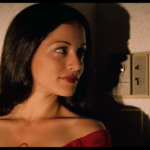 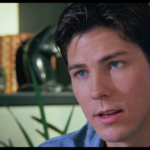 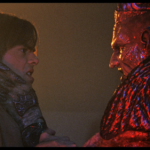 The audio is a mixed bag for this set. Every other movie has the same mix: the first and third have a DTS-HD MA 2.0 mix and the second and fourth are in a 5.1 mix.  The audio for the first movie has its strong points and very clear dialogue.  Also, the effects are notably clean.

The 5.1 mix on the second film does take the opportunity to fill the speakers but these moments are most noticed during the flash scenes with Morgana connecting to the djinn.  These flashes only last a few seconds but the speakers fill quickly.

As for the third movie, the some of the music gets lost depending on what’s happening on screen.  For example, some of the sound effects like the sword clanging in the third act are clear and easy to hear.

The fourth also really only used the surround sound in a few specific moments.  Aside from the flashes, the public places like the strip club use both the bass and has a good amount of ambient sound.  The mixes have all been done appropriately for each movie. -Out of the bottle: Interview with director Robert Kurtzman and co-producer David Tripet

-The Magic Words: an interview with screenwriter Peter Atkins

-The Djinn and Alexandra: interviews with stars Andrew Divoff and Tammy Lauren

-Captured Visions: an interview with director of photography Jaques Haitkin

-Behind the scenes footage compilation The WISHMASTER series is one of those horror franchises that starts off strong and loses a bit of the scariness by the last film.  A lot of it has to do with losing Andrew Divoff after the second movie because he did add plenty to the djinn character. Even Kane Holder thinks that he’s a creepy dude without the make-up on.  The set does have the best versions of the movies to date and that includes the audio & video.  Again, I do think that the first movie could’ve done with a 5.1 mix if it existed rather than the stereo but it still has a good sound.  The extras are extensive and they covered all of the pertinent info on the series.  Overall, this set will appeal to both the new and old fans alike.