In 1969, there was a man who killed several people on one block with a shotgun.  He kept asking whom they told and where they are.

In the present time, John, Elliot and his girlfriend Sasha, have moved into a house near their school. It’s old and creepy.  All of the furniture is in the basement and is from the previous owner.  On the night of the kid’s housewarming, Elliot’s niece wanders into the upstairs bedroom and finds a coin.  When she tells her uncle about it, he picks it up off of the floor puts the coin in the nightstand.  The coin keeps falling out of the drawer somehow and Elliot finds some hidden scribblings on the drawer’s contact paper that say…

THE BYE BYE MAN is a horror film directed by Stacy Title and she has dabbled in the genre for the majority of her career.  The actor’s cast in the film, aside from Carrie-Anne Moss, are all relative newcomers to film.  On the plus side, this means that you don’t have any expectations with how the actors perform and that’s a good thing in a horror film. The video is a 1080p AVC transfer and it has been done well.

Its been filmed digitally and looks sharp.  The details are clean and they stand out in not only the facial close-ups but also in the environments in the movie.  The dingy house that the kids live in have visible blemishes that come through.  Also, things like the scratched-in madness in some of the various spots onscreen like the drawer can see the details down to the splintered wood.  The coloring is muted a bit but I think that’s for the tone of the film rather than anything in the transfer.  The blacks  are dark and heavy like during the séance scene.  The faces sit on what looks like an endless and deep black. 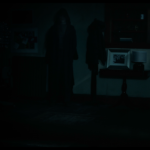 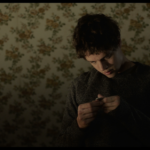 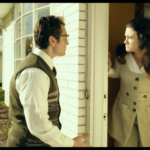 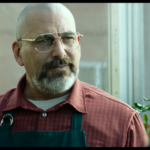 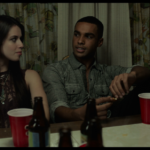 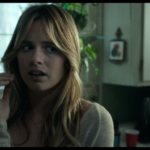 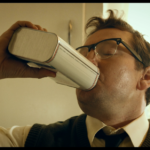 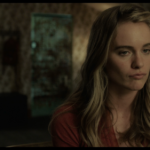 The audio is a DTS-HD Master Audio 5.1 mix that keeps things creepy.  The audio in the rear speakers add some echoing and sound movement in the scenes in open spaces.  One of the best scenes with both strong bass and treble is the train scenes.  You hear it chug along with a heavy push as it gets closer until it hits a certain person. The build up is gradual and slowly spreads out in the home theater. The dialogue and effects are clear and easy to hear.  Overall, this is a strong mix for the horror film. The are no bonus features THE BYE BYE MAN is an incredibly creepy film with the quiet stare of an evil being that made me a little uneasy.  As for the story, the premise of evil that you can’t speak his name or even think it really is brilliant because to say or think it becomes harder and harder.

Once the story involves the college students and his family, the story fizzles out a little bit and some of the CG effects need polishing.  As for the release itself, it has a decent audio and video transfer but there are no extras on the release.  Also, the film comes in rated and unrated versions that are 3 minutes different.  I watched the Unrated and didn’t see much of a difference to have two cuts of the film.  So, I would recommend maybe renting this if you’re interested in the story but definitely try before you buy.