WARLOCK
In 1691, a witch hunter named Giles Redferne has caught and sentenced The Warlock to death for his unnatural crimes.  Right before his execution, Satan comes to him and sends him to Los Angeles in 1991 but Redferne follows him through before the portal closes.

Satan has tasked The Warlock with gathering a relic called The Grand Grimoire.  It’s a satanic book that reveals the true name of God.  So it is a race against time to get the pieces before The Warlock can unmake existence. WARLOCK: THE ARMAGEDDON
Druids have been the secret protectors from Satan and his son.  Their power comes from six magical stones but the Christians looked at it as another form of Satanism.  They took the stones and scattered them until they are needed again.  In the present day, 2 young kids named Kenny and Samantha are the next to be tapped to become Druidian warriors.  This is a power that is only granted to those from the order and trained to protect the stones. WARLOCK III: THE END OF INNOCENCE
Kris is a girl with no family history and as far as she is concerned, her family line begins with her.  She has been informed that she has inherited a house and goes to see it with her friends.  With these visions of a past life, Kris realizes that  Warlock wanted her as a sacrifice until her mother trapped the warlock in the house. With Kris’ friends helping to fix up the house, The Warlock is inadvertently released. WARLOCK
The transfer is a 1080p AVC presentation looks pretty good.  The HD remaster of the movie has cleaned it up a good amount with bring out some of the details that probably haven’t been seen since the movie was edited together back in 1989.  The details in the images are strong with a grain that is just as strong.  There is some crushing in the blacks but nothing that is overly distracting.  Of course, some of the 1989 effects don’t look as seamless as they were when the movie released but, hey, its what was available 28-ish years ago.

WARLOCK: THE ARMAGEDDON
The transfer is a 1080p AVC presentation and it isn’t quite as good as the first movie.  Part of it might have to do with it sharing a disc with the third movie in the set. The film grain waivers from heavy to about medium with the overall look looking like a transfer from a DVD or even an upscaled 720p master. The coloring is affected by the outdoor colors, creating a tan tone.  In the same move, the indoor and darker shots look better on the skin tones.  As for the details, the images can go from very detailed to noisy and soft.  This usually coincides with the addition of the CG effects in scene.

WARLOCK III: THE END OF INNOCENCE
The transfer is a 1080p AVC presentation that leaves room for improvement.  The grain is consistently heavy like the previous movie.  Between the flashbacks and visions that Kris has, there are some sharp details peppered into the transfer.  The skin tones are more natural and match up better than the second movie.  The majority of the movie is indoors and the outdoor shots have a softness to them that look like they were purposely added. 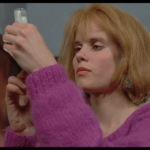 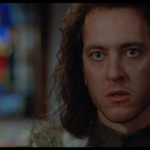 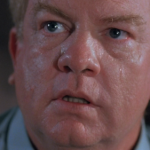 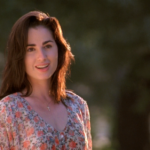 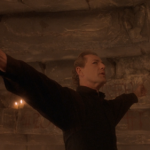 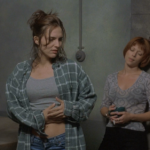 WARLOCK
The audio is a DTS-HD Master Audio 2.0 mix.  It is solid with a lot of the effects and dialogue coming through clearly. There are some good LFEs in the storm scenes and various other parts where the bass is needed. All of the other sounds in the mix come through are properly prioritized.

WARLOCK: THE ARMAGEDDON
The audio is a DTS-HD Master Audio 2.0 mix.  This has been mixed in the same manner as the first film.  The only issue was a little overdrive during the finale, the sound blanketed the dialogue some.

WARLOCK III: THE END OF INNOCENCE
The audio is a DTS-HD Master Audio 2.0 mix.  Again, this is the same mix as with the other two movie.  There tends to be a little less going on with the majority of the movie being dialogue within the house or dorm rooms.  There is a nice effect of glass shattering but, overall, it is fairly run of the mill. -Satan’s Son: This is an interview with Julian Sands

-The Devil’s Work: This is an interview with director Steve Miner

-Effects of Evil: These are interviews with Carl Fullerton and Neal Martz who are the make-up effects creators

WARLOCK III: THE END OF INNOCENCE
-Vintage Interview: with Cast and Crew Overall, it was fun watching this collection because I haven’t seen these movie in very long time.  In fact, this was my first time screening the third movie and I have always enjoyed the first two. The first movie is long overdue for this Blu-ray release and they did a good job with it.  Sure, there are the issues you’ll find on a lot of horror releases in HD but it isn’t terrible.  The audio got about the same score across the board so their scores match up well.  There is also a decent amount of bonus features in the set so they’re there to enjoy.  If you’re a fan of these movies or collect Vestron Video releases, this is a no brainer, pick it up.