When last saw our heroes, they have been made to drop to their knees to Negan and The Saviors. They have been beaten both mentally and physically by trying to get the upper hand on this group but they are met with great resistance at every turn. It looks like Rick and his crew may no longer be the alphas in the world.

This season has introduced a few new characters like Simon and, of course, Negan. Jeffrey Dead Morgan plays Negan and there are some difference on the show vs the character from the comic book. That’s not to say that Morgan’s performance isn’t anything short of amazing. He has this ability to not only get under your skin but to take up residence. They may not share the looks but Morgan has that personality and fire that he brings to the role to make him convincing.

Aside from the popularity of comic book movies in the last 6+ years, this is directly influenced by a comic book and it is one of the most watched shows on TV. This is a pretty good season with some of the focus being spread around more than the last. The video is a 1080p AVC transfer that has the same look from the previous seasons.
To keep from having too clean of a look, there is a nice grain that is pretty consistent. The grain is a little rough when mixed with some of the smoke/fog in the first episode of the season. It can make some little issues but it isn’t like it happens all the time. The coloring in the show is bold where it needs to be, mainly in the green foliage and the red blood. With the show having no shortage of gore and grime, both can also be seen in great detail. The facial lines and imperfections are also easy to be seen in close ups 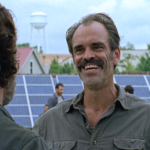 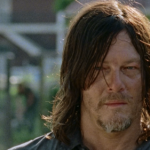 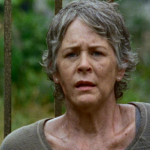 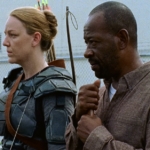 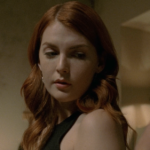 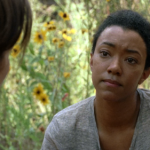 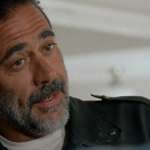 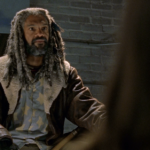 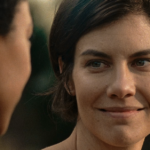 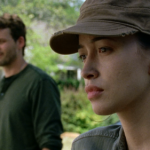 The audio is a lossless Dolby TrueHD 7.1 mix never disappoints. There is also a great amount of ambient sound from the quiet southern countryside locations. In the distance, you can hear the wind blowing through the trees, birds chirping, insects speaking, and walkers gurgling. Some of the indoor scenes in The Kingdom, in the halls of the savior complex, and the near empty houses in Alexandria use some good sound space to give the effect that they’re empty. Layered with the many strong sound effects is the score/music that brings out the eeriness that the show. Weapons slicing and rounds being popped off also have a strong presence and make the things on screen seem more visceral. Voices also come through clearly. -Inside THE WALKING DEAD: These are recaps each episode.

-The Making of THE WALKING DEAD: This goes a little deeper into creating each episode to immerse the audience in this world.

-In Memoriam: This is the cast looking back at the fallen and gives a little info about each.

-A Larger World: This is a featurette on set construction.

-Breaking & Rebuilding: This looks at the Rick Grimes character and his descent and ascension as a leader.

-A New Chapter of Fear: This sheds some light on the opening episode for this season.

-Top Walkers: Some of the best of the worst walkers they could find.

-Warrior Women: This featurette looks at the female characters and how they are tough as nails.

-The Writers of THE WALKING DEAD: This is of the writers and their love for creating the show.

Episode List
1.The Day Will Come When You Won’t Be
2.The Well
3.The Cell
4.Service
5.Go Getters
6.Swear
7.Sing Me a Song
8.Hearts Still Beating
9.Rock in the Road
10.New Best Friends
11.Hostiles and Calamities
12.Say Yes
13.Bury Me Here
14.The Other Side
15.Something They Need
16.The First Day of the Rest of Your Life THE WALKING DEAD maintains their spot for being the best show out there because they’re figuring out that change is intriguing, The show also treats the characters with respect but no one is every really safe. The acting talent and story has improved so that’s always a plus. Plus they have Simon on the show now…

Anyway, the video transfer is excellent and gives you the feels as you’re watching the show. The losses audio is also well done with the plethora of things happening at any one time. Overall, I highly recommend picking this one up. It’s an easy choice.