George Beard and Harold Hutchins are best friends. They have the same classes, pull pranks, and draw comics together. Their “company”, Treehouse Comics, Inc, has the most incredibly, fantastic, amazingly cool superhero comic called Captain Underpants. They have two enemies: Mr. Krupp, the school principal and Melvin, a know-it-all classmate.

After the entire school has been punished to participate in a school function on a Saturday, the two sabotage Melvin’s project to go completely haywire. After the chaos, Mr. Krupp was able to catch the pranksters on video and their punishment is to separate them in school. George hypnotizes Krupp with a ring and it changes him into Captain Underpants. This could be their best idea ever…or possibly the worst…

CAPTAIN UNDERPANTS: THE FIRST EPIC MOVIE is a film animated by DreamWorks Animation and based on the popular book by Dav Pilkey. It features the voice talents of comic actors such as Kevin Hart, Thomas Middleditch, Ed Helms, Nick Kroll, Jordan Peele, and Kristen Schaal.

It’s the type of comedy that is pretty common anymore with entertainment for both the kids and the parents so that when the parents take the kids to see it, they can enjoy it as well. This isn’t anything like RICK AND MORTY or even ADVENTURE TIME in the way that they sneak the adult jokes in but the comedians deliver the jokes well. Together, Kevin Hart and Thomas Middleditch are perfect for the characters. They carry and move the story along to keep things interesting. 4k UHD
The video is a 2160p HEVC presentation that looks excellent in the 4k UHD format. The animation is smooth and shows the care and quality of the feature from the studio. The lines are smooth and have a lot of intricacies that are easily seen in this format. Some of the other details are in both the foreground and the various materials like clothing that has that fabric look. The coloring is bold and brilliant to keep the images cartoonish and never too much in reality. Colors are bright and bold where they showed be and the exaggerated colors are brilliant. The blacks are dark but not as deep as you would expect with HDR being in the transfer.

Blu-ray
The video is a 1080p AVC presentation that looks about as good as the 4k disc. The coloring is the most noticeable that is bold and keeps the images fresh. You are still able to see the details like the little sketch marks from the comic artwork. The blacks are dark as they need to be but I will say some of the sunny scenes might have been a little much. When the light hits their skin, such as during the carnival scene, you get a minuscule spot of banding but it is very fast and not bothersome at all. 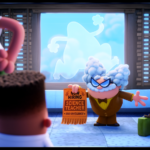 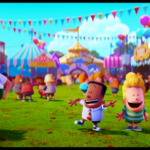 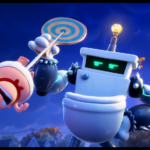 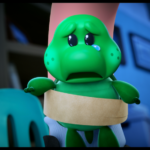 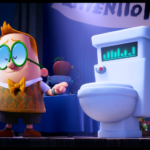 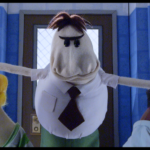 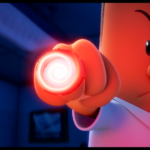 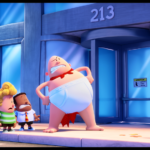 4k UHD
The audio is a Dolby Atmos mix that defaults down to a Dolby TrueHD 7.1 mix depending on the equipment. The audio mix plays well with what’s happening on screen. Being that this is both a kid’s movie and animated, there are a lot of layered effects along with a lot of dialogue. The Atmos mix translates that big movements like the hypnotic ring effects with smooth overhead and sweeping motion. There are plenty of scenes that use this properly. There are also surprisingly strong LFEs, especially in the final fight. Other effects are clear and concise.

Blu-ray
The audio is a lossless DTS-HD Master Audio 7.1 mix that sounds excellent. The surround channels utilize the 7 speakers to make smoother movements and makes the space feel larger. Thee movements also swoop as does the action on screen. The LFEs are strong and go nicely with the action. The layering is also strong with no effects overpowering the dialogue. The voices are always easily heard and understandable. -The Captain Underpants Guide to Being a Hero: George and Harold do a rundown of requirements to be a superhero.

-The Professor Poopypants (Totally Original and Supercool) Guide to Being a Villain: The professor give the lost to be a villain.

-Missing Underpants: The Deleted Scenes of Captain Underpants: The First Epic Movie: The director of the movie shows some unfinished scenes that didn’t make it on screen.

-“A Friend Like You” Lyric Video by Andy Grammer

-Tighty-Whitey Q&A With the Stars – Part 1: Asking the cast some questions.

-Tighty-Whitey Q&A With the Stars – Part 2: Asking the cast some questions…again.

-Kevin Hart and Ed Helms Surprise Fans: The two actors have some fun with little fans.

-Lunch Lady PSA with Kristen Schaal: This is a message that lunch ladies should be more appreciated than they are.

-Sock Puppets Real Stars: The sock puppets are back.

-The World of DreamWorks Animation This movie really surprised me with how much I enjoyed it. I think between the funny cast and the crazy world that it takes place in, this is good entertainment for just about any age. I also enjoyed the fact that it is centered around comics and that little snippet was how my friends and I would spend our free time.

The 4k UHD and Blu-ray both have excellent video as well as sound. The 4k UHD has a bit more in both categories but it is only a slight advantage. The extras area mixed bag but that’s usually what you get from a children’s film release. With the success of this first movie, I hope that it sparks a sequel with the same cast and crew. So, this is a release that I highly recommend for both the entertainment value and disc specs.