Conan was born of war.  He is a part of the barbarian tribe and son of Corin, chief of the tribe.  While young Conan is learning how to forge blades and train is swordplay, there is a scourge spreading across the land.  Khalar Zym is the one leading his followers in search of an evil mask that will allow him to be unstoppable.  He and his daughter Marique are also looking for a pure blood girl to perform the ritual that makes the mask whole. Grown up and doing odd work to survive, Conan runs into one of Khalar Zym’s followers and he begins to work his way up to find the man who killed his father.

CONAN THE BARBARIAN is a reboot of the 1982 film.  This movie is directed by the reboot/remake king, Marcus Nispel.  He has directed the 2003 movie THE TEXAS CHAINSAW MASSACRE and the 2009 movie FRIDAY THE 13TH.  With this movie, he tries to create a new hero out of then “unknown” named Jason Momoa.  He’s not as big as Arnold Schwarzenegger but he has the look down from the comics and cartoon versions.

There are a few things that could really have made this the beginning of a franchise: A stronger script and better villains.  The story just felt a little disconnected and not as enticing as this world has to offer.  As for the villains, Stephen Lang does a great job but his character needed to be more engaging with the fighting.  That’s what Conan fans were expecting from the movie.  Momoa has the build and even that barbarian charisma but a good character has a lot of problems in a messy movie. 4k UHD
The video is a 2160p HEVC and is from a clean, digital source.  The images have good amount of sharpness that has cleaner edges than the Blu-ray.  The grain is heavier and creates some noisy spots but not to the point of being too distracting.  The colors are somewhat muted in both the opening and when the movie moves to the desert areas.  The earlier scenes in the barbarian village have a bluish hue and then it moves to warmer colors in the arid scenes.  The HDR also adds some deeper blacks to the images where there is high contrasting and dark scenes.

Blu-ray
The video is a 1080p AVC presentation that look great on the format.  It doesn’t have the dark blacks like the HDR but they do hold their own.  As for the coloring, you still get the same color filters from the early scenes however their intensity is slightly less.  Details as well as textures are sharp and come through in a lot of the makeup effects like on Marique’s face. 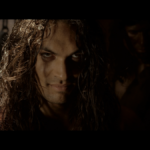 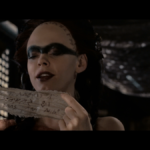 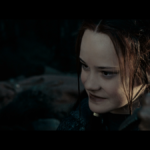 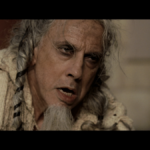 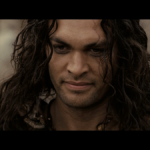 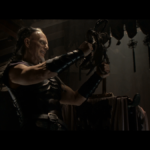 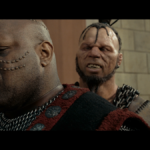 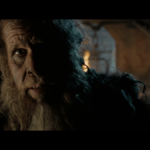 4k UHD
The audio is a Dolby Atmos mix that defaults to a Dolby TrueHD 7.1 mix.  The sound movement in the overhead speakers get a decent amount of use in more of the score than the effects.  There is some ambient sound in the crowded bar scene but there just wasn’t as much overheard use as I was expecting.  Of course you get a more aggressive sound mix with the new audio so that’s definitely a plus.

Blu-ray
The audio is a lossless DTS-HD Master Audio 5.1 mix.  The effects moving around the sound field are mostly heard during the larger fight scenes.  There is plenty of swords and shield clanging that sound excellent.  There is also great use of the LFEs during some of the fights but also the long, slow shots. -The Conan Legacy: This is a featurette that explores the character and the filmmaker’s inspirations for bringing their version to screen.

-Robert E. Howard: The Man Who Would Be Conan: This is a look at the creator of Conan and how the character wouldn’t exist without him.

-Battle Royal: Engineering the Action: This featurette is about figuring out the fight choreography.

-Staging the Fights: The featurette puts the finished footage next to the pre-viz. Because it is a reboot of such a classic, its hard not to look at this as a movie in the shadow of the original.  As I said, with some polish and a stronger script, this could’ve gone so much further into franchise territory.  The 4k UHD release strengthens the video but the Atmos mix takes the audio to amazing places.  The extras are the same ones from the 2-disc Blu-ray release and they are still relevant for this current release.  Overall, I would say that if you like the movie or you missed it the first time around; pick up this new release 4k UHD.