When Paula White, daughter of the famous explorer Maple White, brings her father’s journal to Professor Challenger in London, she shares some information from his lost expedition.  It was to a mysterious peninsula in Venezuela that, according to the journal, is inhabited with dinosaurs.  This is proof enough for the Professor to go and find Maple White to bring him home.  The team consists of: Paula White, Professor Challenger, a sportsman named Sir John Roxton, a news reporter named Edward Malone, Professor Summerlee, a servant Zambo, and Challenger’s butler Austin.

THE LOST WORLD is directed by Harry O. Hoyt and based on the novel of the same name by Sir Arthur Conan Doyle.  The story goes that this enormous 10-reel film was destroyed by the studio to make room for another film and it was thought to be…well…lost forever.  The 2k restored version is the most complete version of the film that has ever been released.  This was a collaboration by Flicker Alley, Lobster Films, and Blackhawk Films.  This has unseen scenes with the state-of-the-art stop animation from the time and the movie is comprised of film elements from around the world for the best possible version to ever be seen.

A lot of people may not know this but THE LOST WORLD has influenced a lot of adventure and exploration films over the years, including Pixar’s UP.  That’s right.  The world where the adventure took place was directly taken from the layout of the peninsula from this film.  Here is the image: It isn’t the first adventure film to be made but it was one of the most ambitious for its time. Because it was in the earlier days of cinema, there are a lot of techniques that were used to be able to convey the story. This in tern led to movies like KING KONG and so on. The video is a 1080p AVC presentation that shows the meticulous restoration that was done for the film.  There are some blemishes and lines on the film but they don’t take away form the experience of watching this classic.  There is a beautiful grain on the film that keeps the vintage look being that this is from 1925.  The details in the images are strong in both the people’s face but also the FX that were used.   For example, the stop motion creatures have good textures for the time period as well as the practical effects on the actors.  This is another example of how much of the intricacies film picks up and how much a remaster can bring a film to life. 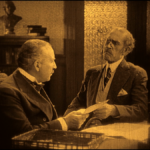 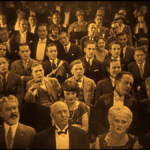 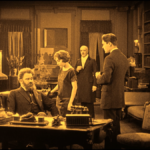 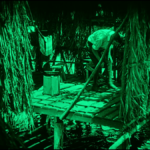 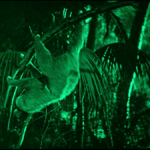 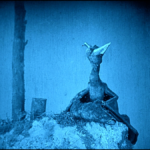 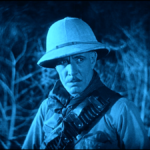 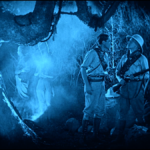 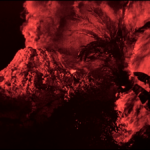 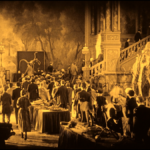 The audio is an LPCM 2.0 that is perfect for what the film requires.  The track features the full orchestra composed by Robert Israel.  The sound comes through clear and with adequate separating of the sections in the band. -Audio Commentary: with Nicolas Ciccone.  He is a historian and filmmaker.

-THE GHOST OF SLUMBER MOUNTAIN: Short, silent film from 1918

-Illustrated Booklet: 14-page booklet with the essay “The Lost World: The Secret of the Restoration” by Lobster Films’ Serge Bromberg. THE LOST WORLD is definitely a classic and it is really awesome that there isn’t only the unabridged version for audiences to enjoy and compare.  This is the version that let’s you get the complete story experience and composed audio as an all round success.  The extras included are a few short films and a commentary about the movie.  Let’s not forget the essay included in the booklet that Flicker Alley never forgets.  I’m a fan of not only this version but the film in general so I can highly recommend picking this up to continue your cinematic journey and education.