The police are chasing a known criminal named Edgar Munsen and he runs to the roof of a building.  During the stand off with the police, he holds up a remote control to activate a game and is killed from the police gunfire.

In a room, there are five people are being held with a device on their heads and chained with collars to the wall.  The voice of John Kramer or Jigsaw, explains that they must offer their own blood to get out of this.  Let the game begin.

Peter and Michael Spierig or The Spierig Brothers are the directors of JIGSAW.  The pair has done a few other films including PREDESTINATION and DAYBREAKERS.  Even though SAW 3D was supposed to end the franchise, this is the eighth film in the series and it looks like it may keep going.  The studio decided instead of simply ending things that they would take a year off and come back with something closer to the original idea.  I’ll admit, I was really expecting some more of the same torture p0rn and gore that I have seen from the franchise in the past.  To my surprise, there are some moments of gore but in a way to move the plot rather than for the shock value. The video is a 1080p AVC presentation that maintains the tone of a horror thriller.  The hue of the video changes from time to time depending on the scene setting that the movie is focused on.  For example, the scenes where people are “in the game” has a warmer tone to it and the medical/police scenes have a cooler look.  The images are clean and have sharp details.  There are definite lines and edges that look excellent as well.

ULTRA HD BLU-RAY: The Ultra HD blu-ray 4k Disc presentation does offer a slight advantage with the 4k resolution and HDR when considering the dark scenes and the blacks being a deeper hue. I felt it really helped set the tone of the film when you are immersing yourself into a horror film and feeling that edge of your seat atmosphere throughout such pivotal scenes. 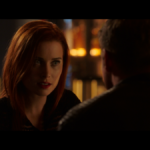 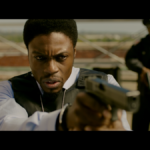 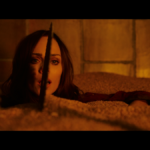 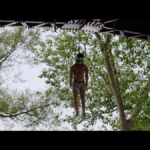 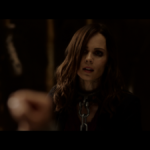 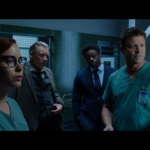 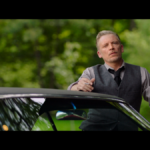 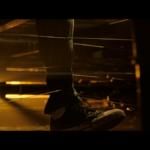 The audio is a Dolby Atmos that defaults to a Dolby TrueHD if you don’t have the equipment for Atmos.  The sound is robust with the moments of tension that build from the score.  Both the bass and treble are clearly layered with strong effects as well. The high-pitch buzzing saws, immersive traps and other devices really come to life with the overhead channels. -The Choice is yours: Exploring the Props: This is an extra about the items created for the movie and what was done to keep the ideas fresh.

-I Speak for the Dead: The Legacy of Jigsaw: This is a 7-part documentary about the evolution of the franchise since the first film. JIGSAW does two things for the fans: It has made enough changes to refresh the franchise and has a lot of inventive torture games so that it doesn’t stray too far away so that the fans can enjoy it.  The story is interesting and has a nice twist towards the end but I definitely don’t want to say much more about the film.  All I will say is that I really feel like the plot wasn’t an afterthought and they made sure to try something very different over the past decade.

This movie is easily suited a much wider valley of moviegoers. The people on props and other items have been explored to use the right things to match the story.  The Blu-ray has a clean transfer and the audio is very well done.  The extras are good but I was expecting more for such an important movie in the series.  So if you are a fan of the SAW Movies, picking this up is a no brainer but if you’re unsure, renting it is always an option.