Danny Zuko and Sandy Olsson met at the beach during the summer of ’58.  They fell in love and had the best time with each other but with school about to begin, she has to go back home to Australia.

His school is Rydell High and he is a member of the T-Birds. They’re a gang with his friends/members named Kenickie, Doody, Sonny, and Putzie.  The female group is called The Pink Lades.  The members are Rizzo, Frenchy, Marty, and Jan. This is their last year at the school and they’re gonna rule the school.

As it turns out, Sandy didn’t have to go back to Australia and she also will be attending Rydell as a senior.  Frenchy is the first friend that she has made at the school and Sandy gets to meet the Pink Ladies.  The only thing is that Sandy might be a little “too pure to be Pink.”

GREASE is a musical directed by Randal Kleiser.  His other films include FLIGHT OF THE NAVIGATOR and WHITE FANG.

Musicals are as old as cinema with sound and they have been loved many audiences everywhere.  I would say that every decade, there is a musical that makes audiences remember why they love the genre.  In the 1978, it was GREASE.  40 years later and it is still just as enjoyable as the first time.  The songs are catchy and the story holds up to be relatable to anyone who has ever been in high school.  The visuals are also easily recognizable so that goes to show just how much this movie has made its mark. 4k UHD
The video is a 2160p HEVC presentation that has made the film brighter than ever.  The film has been restored completely and has been color corrected from the previous Blu-ray releases but I’ll get into that in the next section.  The colors being brighter makes the entire film feel happier in general.  The pinks, light blues, and the reds in particular stand out with those colors being so important to the story.  The blue skies are also a part of that happier look I mentioned.  The HDR also makes the contrasting have stronger lines and darker blacks where the movie needs it.  The pep rally and some parts of the drive-in make the images have better definition.

Blu-ray
The video is a 1080p AVC presentation that is also a huge step up from the previous Blu-ray.  The reference that I’m using is the rocking Rydell edition. The video on that looks darker and warmer when it comes to skin tones in particular. Everyone looks like they have a tan and the hue is borderline burnt like a movie that has been in storage for decades.  What they did for this release is rescan the film’s negative and used a more modern color correction technique that wasn’t available in the earlier days of Blu-ray.  The film as a whole feels brighter and the coloring is cooler.  If you look at the photo capped of Danny talking to a few women outside of the school, one of the girl’s faces in the background has a blue-ish tone to it and this is from the color correction.  Things like this are in the film but they’re never prominent and affect the viewing. Like the 4k, the contrasting has greatly improved from the correction at the studio.  Details are also better than the Rockin’ Rydell Edition.

These are the comparisons. The one on the left is the 2009 version and the right is the 40th Anniversary 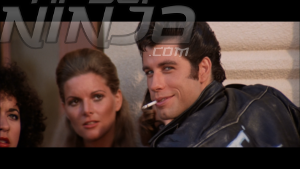 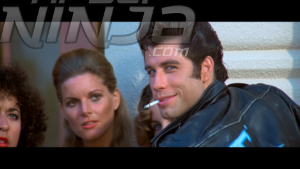 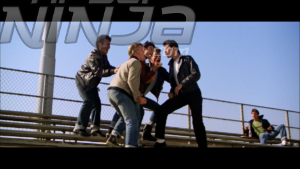 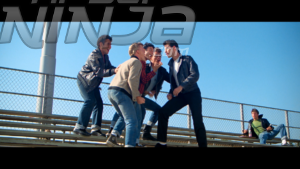 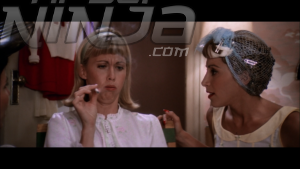 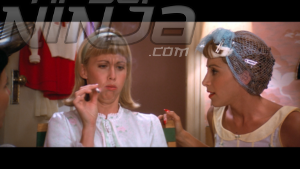 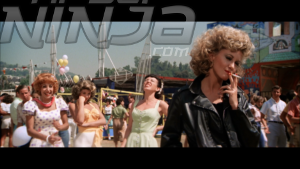 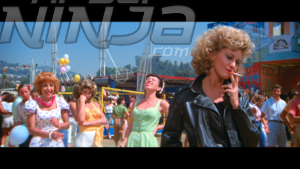 The audio is a lossless Dolby TrueHD 5.1 mix that sounds excellent.  It is the same for the 4k UHD as the Blu-ray.  The voices are clear and discernible during both the singing as well as dialogue.  The surround sound is utilized well to keep that theater feel but the front does most of the work.  The LFEs are there to round out the music and they are strong on the effects as well.  Revving engines shine and the scene at the dance really works. -The Time, The Place, The Motion: Remembering GREASE

-GREASE: A Chicago Story: This 25-minute extra looks at the stage version and an in-depth look at the creation.

-Alternate Animated Main Titles: This is a new feature that was dug up for this release.

-Rydell Sing-Along: This is a version to sing along with the music.

-Grease Memories from John and Olivia

-The Moves Behind the Music Hands down, this is the best GREASE has ever looked.  I’ll be honest, I wasn’t sure about the huge color differences from the previous release to this one but after learning about what was done, I’m sold.  This is the way that the movie is intended to be seen.  The 4k version looks spectacular and the Blu-ray looks brilliant too.  I’m a little surprised that a musical on this format didn’t get the newest encode for the audio but the mix is nothing to scoff at.  The extras are really good with a nice inclusion of new features that have never been seen before.  Both the hardcore and casual fans will be impressed with this release because this is worthy edition for such a beloved film.