In the Natural History Museum at Tring, the evil Moriarty has captured some garden gnomes and he is ready to crush them under some fossils. He is thwarted by the famous duo of Sherlock Gnomes and Dr. Watson. Sherlock knocks the villain to the ground and turns the plan around on him. Some time later, there is a string of gnome-napping crimes all around London and Sherlock and Watson are back on the case.

After Gnomeo and Juliet get married, the entire green crew is moved to a new home. The new garden is in shambles and the two feel like they need a new centerpiece to bring everything together. When Gnomeo tries to get a special flower that his wife will appreciate, it goes wrong and she goes to save him. While they were gone, someone steals the entire garden community without a trace. Sherlock and Watson show up because a clue led them to the garden. A new clue to get them back is found and the four go to save them.

SHERLOCK GNOMES is directed by John Stevenson. He also helmed KUNG FU PANDA in 2008. I’ll be honest; I haven’t seen the first movie so I didn’t know any of the characters going in. Luckily, all I needed to know is that Gnomeo & Juliet are married and Sherlock Gnomes is like his literary counterpart. There are a few adult jokes that are subtlety snuck in there so when watching it with the kids, you might laugh when they don’t. The video is a 1080p AVC presentation that has what you would expect from a CG animated film. The coloring on the gnomes varies when it comes to the primaries. Depending on the age of the gnome, the color can be bold or faded. Places like Chinatown have brilliant neons and reds that looks excellent. The details are immaculate with some of the aging, weathering, and dirt on the gnomes. There are also small cracks and chips on them. Other textures like the stone gargoyles and the fossils look proper. On some of the edges, there is some pixelation but I can’t fully tell if it’s intentional or the resolution dropping. 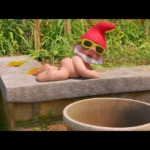 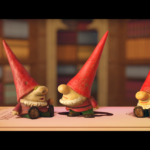 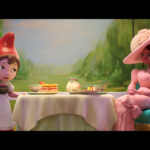 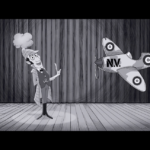 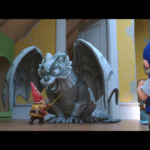 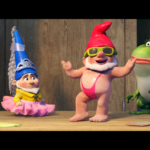 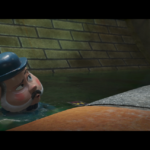 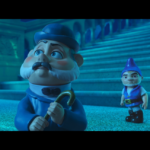 The audio is a DTS-HD Master Audio 7.1 mix. There is some really good sound movement to go along with the sweeping camera movements of the many locations in the movie. The 7.1 setup is definitely utilized. There are a few moments where the LFEs have a strong presence from some heavy hitting the ground or large vehicles. The soundtrack has some great classic rock music and the has some heavy beats during the Mary J song. The voices are prioritized very well with the effects and music going at the same time. There is maybe a line or two from someone speaking with a low voice but nothing too bad. -Gnome is Where the Heart is: This EPK is an overview of the story and where the characters are at this point.

-All Roads Lead to Gnome: London Locations in SHERLOCK GNOMES: This EPK has interviews with the cast and crew about the locations used in the movie.

-Gnome Wasn’t Built in a Day: The Design and Art of SHERLOCK GNOMES: These are how they design the gnomes into their own characters.

-Miss Gnomer: Mary J. Blige and The Music of SHERLOCK GNOMES: This is the design of the soundtrack.

-Stronger Than I Ever Was: The song from the movie with clips from various scenes. Almost like a music video.

How To Draw: This is a tutorial of how to draw a few of the characters.

-Animating SHERLOCK GNOMES: This breaks down the steps in the animation of the gnomes. SHERLOCK GNOMES is amusing at time but this is very much a movie to catch the attention of the kids. The animation on the characters is ok but the locations looks like the real thing. Like I said, some jokes are for the parents and it also helps to be fan of Elton John’s music. Half of the extras are really good and some are kind of redundant. I would say if you have kids check it out but if you’re on the fence, maybe rent it first.