In 2014, a political party called The New Founding Fathers of America (NFFA) have taken office and they want to run an experiment called The Purge. It is a no hold barred event where the citizens can do whatever they want with no consequence or repercussions from the law. It will be on Staten Island and anyone who participates will earn a base sum of $5000. The further you participate, you more money you make.

THE FIRST PURGE is directed by Gerard McMurray and, aside from BURNING SANDS, this is his first big feature. This is a prequel to the movie simply named THE PURGE and it gives a lot of insight as to how the country ended up having this annual genocidal event. In this, it is in the experimental stage and it is a numbers game to get it approved. Y’lan Noel does an excellent job. I like how work on HBO’s INSECURE so I’m familiar with him. This is very different with him being a Nino Brown type and more gangster. Its a nice change to see his range.

The video is a 1080p AVC presentation that has a surprisingly high level of detail and contrasting for being such a dark movie. The majority of the movie takes place at night and the striking coloring is what creates the sharp contrasting against the black shadows. The coloring is also very bold with the contact lenses that the participants in the experiment have to wear. There is a particular scene with Skeletor has these eerie glowing eyes that show off the format well. I have nothing but good things to say about the video. 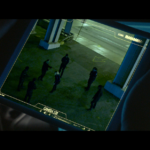 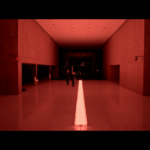 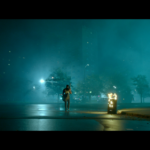 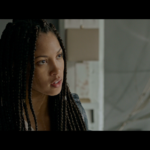 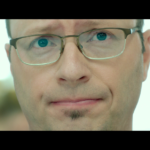 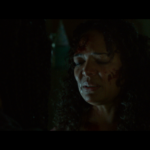 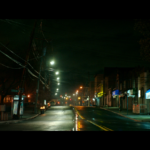 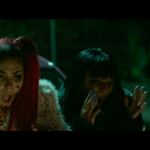 The audio is a dts:X mix that defaults to a dts-HD Master Audio 7.1 depending on the equipment. The movie starts off with a lot of reverberating of the protesting voices in the projects so the sound is bouncing off of the buildings and it fills all of the channels. It really kicks up when the gunfire and explosions are taking place. Once scene in particular has small explosives in a narrow alley and like the protester scene, the reverberations are nice. The overhead speakers also help with immuring you and creating a claustrophobic experience on the island.

-A Radical Experiment: This explains the movie in a short synopsis with clips.

-Bringing the Chaos: This shows how the filmmakers wanted to make the movie a jarring experience.

-Masks of THE FIRST PURGE: This shows the various masks worn in the movie.

THE FIRST PURGE shows that the franchise still has some stories to be told and making a prequel was a good move. It perfectly explains how the country went on to make this an annual thing. The acting is pretty good and there is a little forced humor but overall, the cast works well together. Both the audio and video are impressive on this release. The extras are few but the information is pretty good. Overall, if you are a fan of the series, I can highly recommend picking this one up.