The Thing From Another World Is Out Now On Blu-ray

December 11, 2018 - Blu-ray News, Blu-ray Releases - Tagged: the thing, The Thing from another world blu-ray - no comments

Arctic researchers discover a huge, frozen spaceling inside a crash-landed UFO, then fight for their lives after the murderous being (a pre-Gunsmoke James Arness) emerges from icy captivity. Will other creatures soon follow? The famed final words of this film are both warning and answer: “Keep watching the skies!” A snappy ensemble. An eerie theremin-infused Dimitri Tiomkin score. Rising suspense. Crisp Christian Nyby direction. All merge in an edgy classic produced by Howard Hawks (Bringing Up Baby, Rio Bravo) and filled with Hawksian trademarks of rapid-fire dialogue and of people united by do-or-die stress. Keep watching the skies and the screen. Don’t miss a moment of “one of the best sci-fi thrillers of the ‘50s” (John Stanley, Creature Features).

Purchase The Thing From Another World On Blu-ray Today 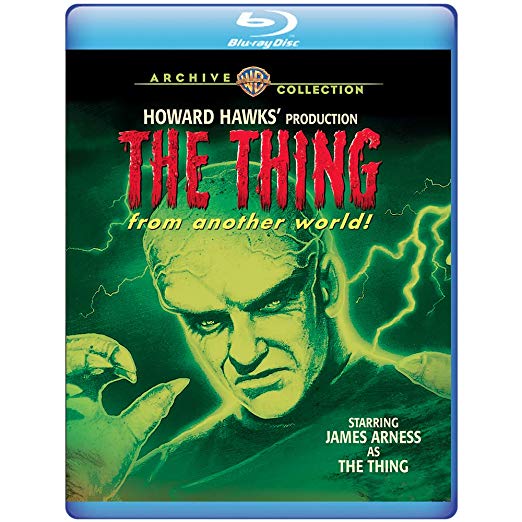 VIDEO QUALITY / AUDIO QUALITY:
The Thing From Another World has a DTS HD Master Audio Track and as well as the English 2.0 Mono track. For a film of this age it sounds amazing. The Black and White looks crisp with great black levels in the video transfer. Definitely a release and film that every true cinephile should have in their collection.