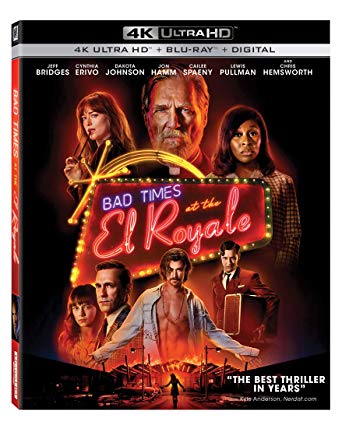 
BAD TIMES AT THE EL ROYALE is a very smart thrill ride with lots of mystery. The film had a fair share of press events, but I feel its still gone under the radar to some degree. Never the less the film deserves praise and is absolutely worth a watch if not a purchase and addition to your collection. BAD TIMES AT THE EL ROYALE stars Jeff Bridges, Cynthia Erivo, Dakota Johnson, Jon Hamm, Cailee Spaeny, Lewis Pullman, Nick Offerman and Chris Hemsworth. An ensemble cast with plenty of talent and thus the acting is stellar and never stale. Directed by Drew Goddard, a Director that has an astute attention to detail.

Drew seems to bring out the best in his cast, and crew included. The set design is absolutely amazing and so surprising that they built the entire little hotel on a set which features The El Royale on the border of Nevada and California. Thus the border line runs right through the hotel and each side of the hotel resembles its state of habitat in one form or another. In the special features they go into great detail explaining this and showcasing the set and it’s definitely worth a viewing.

The beginning of the movie shows a man hiding a bag presumably full of money in the floor of one of the hotel rooms only to be shot when exiting after already having hid it. The film then flashes some 20+ years later in which the group of strangers arrive at the hotel all with their very own secret missions that cant help but intersect. Who are these characters really? And what are they really after? What is their motive and who is hiding a secret? Enter BAD TIMES AT THE EL ROYALE.


BAD TIMES AT THE EL ROYALE has a great neo-noir flare to the movie that translates completely into the film’s set design. Nothing was was just “put there” without thought as all set design and props etc were chosen and/or created specifically for the film and the hotel in itself has 2 different color schemes throughout. The light and dark side, good and evil, while avoiding red. In fact only the line (border) going down the hotel is red. Never the less this detail translates well into the video quality and allowing this film to look stunning in Ultra HD 4K Blu-ray.


BAD TIMES AT THE EL ROYALE comes to Ultra HD Blu-ray 4K with a Dolby Atmos track that sounds amazing with the pairing of the sfx and exceptional songs and track listings within the film. Drew Goddard the Director was on record stating that when making this film that the music was equally important and if they couldn’t license all these songs then he’d go to another studio who could. That said the same attention to detail in regards to the audio was obviously in post and the film sounds amazing both in Atmos and on the Blu-ray Disc which has a 7.1 DTS HD Master Audio track.


Admittedly the special features are pretty bare on this release, but do understand that the behind the scenes feature listed below is VERY well done and informative that it more than makes up for a bunch of thrown together slapstick features. This is one super quality featurette for any fan of the film and/or simply right after a viewing. It’s well worth it.

Bad Times at the El Royale premiered at Fantastic Fest on September 27, 2018, and was theatrically released in the United States on October 12, 2018. – wikipedia