Mid90s (stylized as mid90s) is a 2018 American coming-of-age comedy-drama film written and directed by Jonah Hill, in his feature directorial debut. It stars Sunny Suljic, Lucas Hedges and Katherine Waterston, and follows a 13-year-old boy who begins to hang out with an older group of skateboarders while living in 1990s Los Angeles. 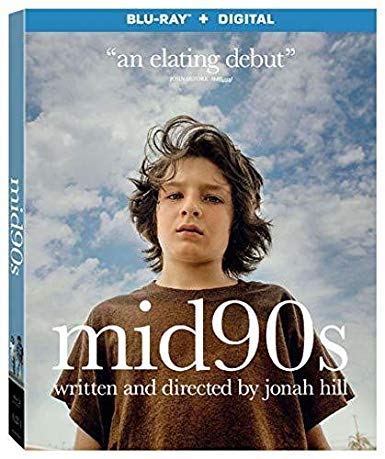 
Mid 90s is written and directed by Jonah Hill and is a very well rounded film if looking at skating culture and conflict when growing up in a single parent house hold. I think many are still longing for that 90s film that is more fun and charming than one of such great character development. This is a much more serious drama when taking a deep look at our characters. It’s also a very genuine look at some of the party scene’s from growing up in the 90s. I being one of those kids and presumably Jonah as well at least late 90s for him if I’m guessing his age right without looking.

The film centers around Stevie who is a 13 year old who is hanging with older kids trying to fit in. Early in the film his brother bullies him and the first chance he gets to hang out with a group of skaters he strikes at it. Stevie trades his older brother for his old kiddie like skateboard and off Stevie goes trying to figure out how to skate and fit in.

The film plays out in a gripping manner that’ll definitely keep your attention as drama unfolds in that of one of the elder kids in the group who goes by the nickname “fuckshit”. Fuckshit is all about partying and having fun which ultimately leads to an almost impromptu like final act which I wont go into detail spoiling for you. This film is definitely worth a watch, perhaps worth owning if the price sparks your fancy.


Shot on 16mm film to give the raw appearance of the quality of that from a home video/film of the 90’s it does really help set the tone. That being said the video quality is judged based upon the director’s vision for the film in that sense. In which case it handles that amazingly.


Mid 90s comes to blu-ray with a 5.1 DTS HD Master Audio track that fits the bill perfectly. A film that has more dialogue than music, but both equally important and placed expertly throughout the film. Vocals are heard clearly in a front heavy track.

The film had its world premiere at the Toronto International Film Festival on September 9, 2018 and was released in the United States on October 19, 2018, by A24. It received generally positive reviews from critics, who called it a “promising first outing for Hill – wikipedia