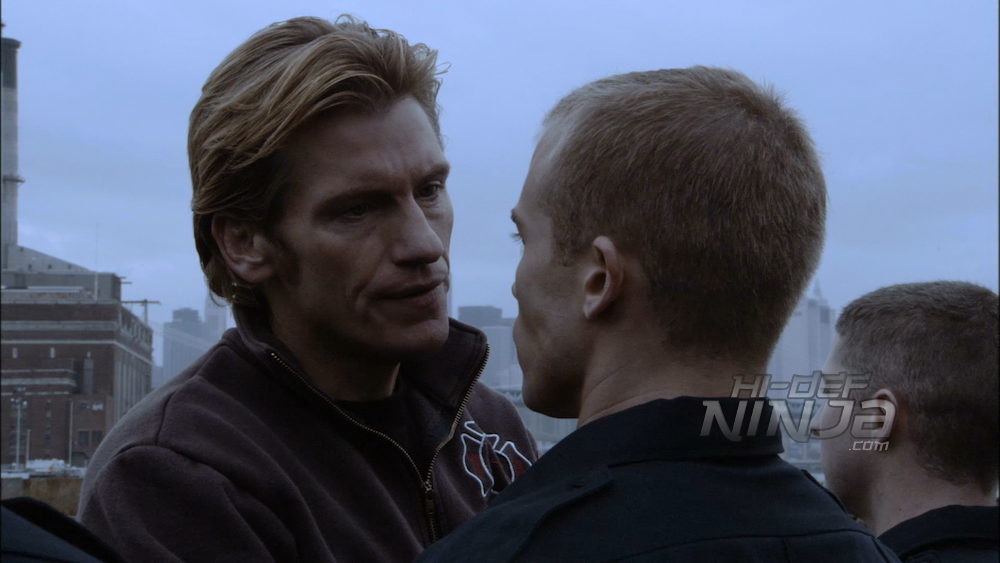 From series creators Denis Leary and Peter Tolan, the highly acclaimed RESCUE ME galvanized audiences with its uncompromising portrayal of the New York City firefighters of 62 Truck, whose duty to save lives puts their own in constant turmoil – on the front lines, in the firehouse, and at home.

RESCUE ME was a series that was on FX. One of the big plot points that have been left out of the synopsis is that these are members in the NYFD in a post 9/11 New York. Denis Leary plays the lead Tommy Green, a fireman who lost a lot of friends in 9/11 but also his cousin Jimmy. His mental state is somewhat in question because he still sees his cousin and random other people that he has lost in fires. The show is interesting enough without Tommy seeing these ghosts. 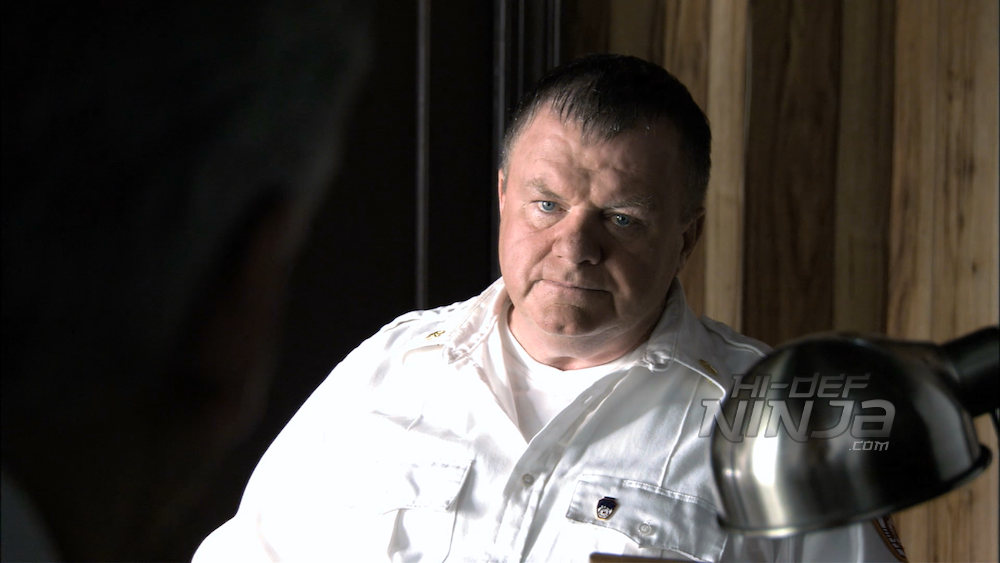 The video is a 1080p AVC presentation. The first disc looks pretty good but there is a lot of noise. The further into the seasons that you get, the more prominent the noise. You can see it on the edges and It makes things look jagged. The stills have a softer look than when the video is in motion. However, there are some great looking details on faces and some of the clothing. The coloring is on the drab side aside from reds and the bright yellows on their uniforms. 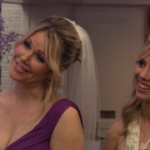 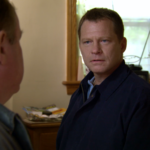 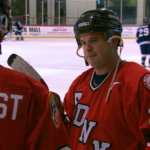 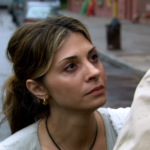 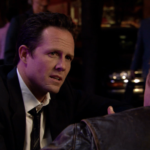 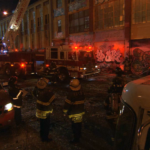 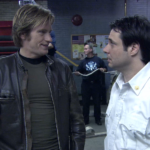 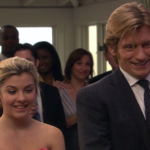 The audio is a lossless DTS-HD Master Audio 2.0 on the 1st and 2nd seasons. The rest is a lossless DTS-HD Master Audio 5.1 mix. The 2.0 mix has a lot of balancing to do with the effects and dialogue but it does it fairly well. On the 5.1 mix, there is a lot more going on with the addition of the other channels. The fire scenes fill the speakers to create a somewhat more immersive experience. The dialogue and effects are mixed well. 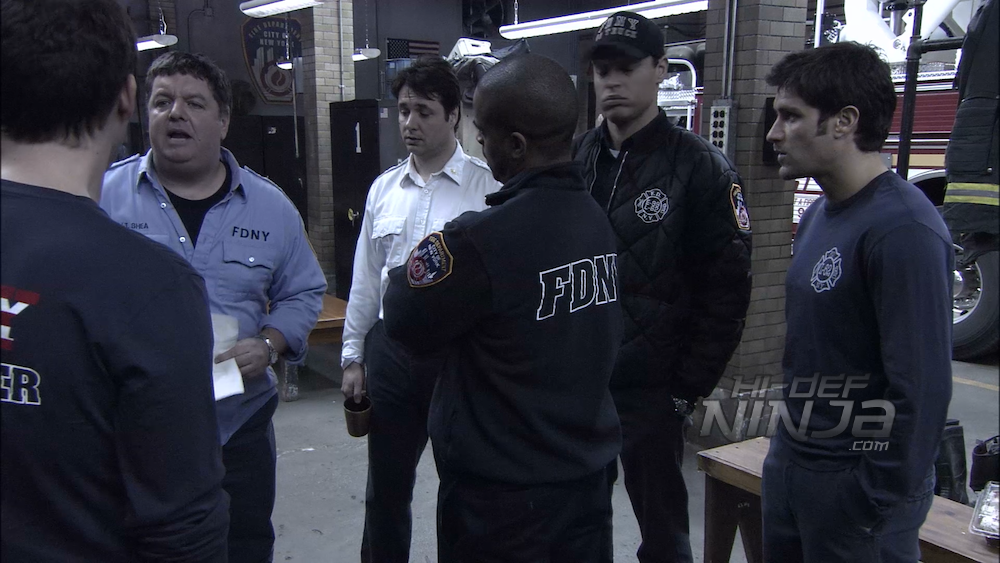 Season One, Disc One:
-Audio Commentary: on the episode “Guts” with Actor/Creator Denis Leary and Creator Peter Tolan.

-How It All Began: This featurette is about how the show got off the ground.

-Authenticity: Denis Leary, Peter Tolan, and other crew talk about how they wanted to make the show authentic.

-The Cast: This is about the cast for the show.

-The Look: This discusses filming the show on location and on the sound stage.

Season Two, Disc Two:
-The Second Season: This is with Leary and Tolan on creating the second season.

-Shooting in New York: Again, this is shooting in the city and the importance of Ground Zero to the shoot.

-The Kitchen: This discusses the kitchen as the main room of the firehouse.

-Writing for the Cast: This is about how the cast might make changes on the fly if it works better for the scene.

-Diane Farr Talks to the Real NYFD: This has Diane Farr discussing the show with real firefighters.

-Real life on the Set of RESCUE ME

Season Three, Disc One:
-Location Tour: This is a look at the shooting locations.

Season Three, Disc Two:
-Behind the Smoke: This is about the first three season’s characters and plot points.

-RESCUE ME Comedy Short: Some comedy on the side.

Being Denis Leary: This has Leary’s stand-in from the show.

-Going to the Gay Place: A joke.

-The Bravest Traditions: This is about the traditions of firefighters.

-Fighting Fires in a Vertical City: This is about the hard times fighting fires in high rises.

This Is Not a Drill: Breaking Down Seven: This is a look at one of the toughest episodes in the series.

Season Four, Disc Two:
-Welcome to the Set: This is with the cast and crew ready for the new season.

-Walking Thru Fire: The Stories of RESCUE ME Season 4: This is about the plot of this season.

-Tools of the Trade: This is about the firefighting equipment that they use.

-Captains: This is about directors Jace Alexander and John Fortenberry.

-Burning Embers: Gavin’s Girls: This looks at the ladies in Tommy’s life.

Season Five, Disc Four:
-Walking Thru Fire: Surviving Season 5: This is about the changes that the show made from season 4 to 5.

Season Six, Disc One:
-Kicking the Tires and Mopping Up: An Attempt to Remember Season 6: This has the ending to season 5 and moving into this season with some changes to characters.

Season Six, Disc Two:
-The Creators Last Call: Leary and Tolan get into the series and about the way to move to the end.

-Burning the Actors at Both Ends: This is a gag reel.

-Balls!: Leary and Tolan talk about the wording they use for body parts.

-Denis & Lenny: A Match Made in Hell: This is a short series of takes with the actors. 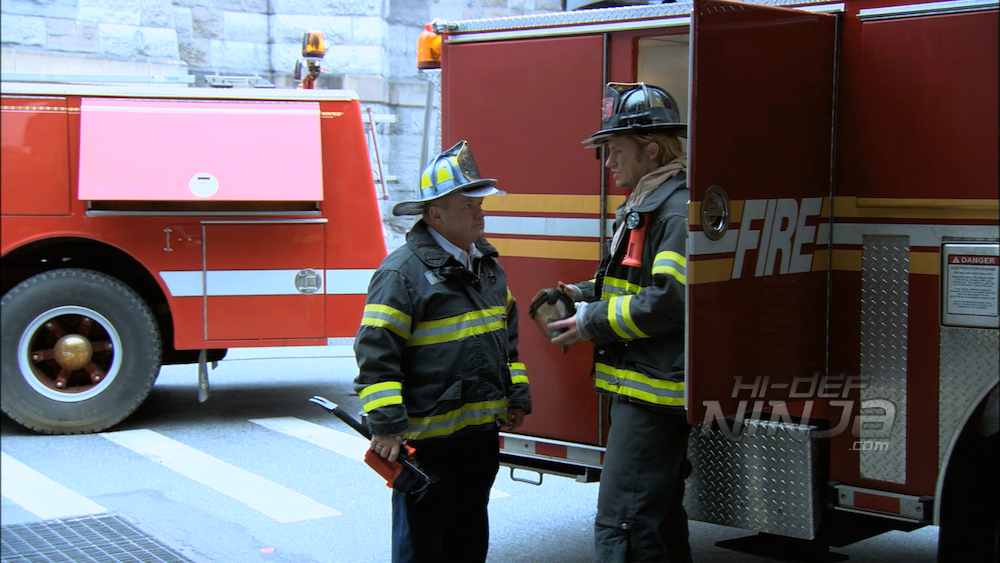 RESCUE ME is a really good show and you can easily see Denis Leary in the series. The quick reactions to the jokes mixed in with some of the real world issues that the men and women of the NYFD have to face make for a compelling series. The video on the Blu-ray is a very mixed bag with some issues but the audio is decent. There are a TON of extras and some of the featurettes are in the 20+ minute mark. So if you are a fan or interested in the series, you should definitely check this out.