As in his classic The Beast from 20,000 Fathoms, director Eugene Lourie plunges us into a thrilling stomping ground, unleashing another Thunder Lizard to stomp on everything in sight. Alarming levels of radiation have infused the water, plants, and skies, and a radiated paleosaurus rises from the ocean depths. In its path: London. In its arsenal: a strength to topple buildings (King Kong’s Willis O’Brien contributes rampaging stop-motion effects), a stride that flattens cars, a flesh-searing radioactive ray and a ticked-off attitude. Left in ruins on land, humankind takes the fight to the beast’s undersea realm, where a two-man submarine crew must ensure the torpedo they fire is dead-on. The first chance is all anyone gets with The Giant Behemoth.

Purchase THE GIANT BEHEMOTH On Blu-ray 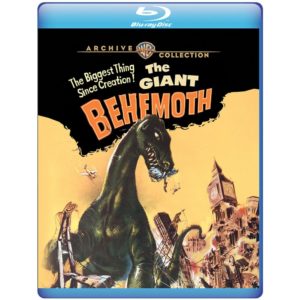 The 1959 classic comes to blu-ray in a made to order blu-ray that allows hope for even more classics to come that otherwise wouldn’t be worth pressing up thousands upon thousands. The Giant Behemoth looks better then it ever has as black and white films tend to look very sharp on blu-ray format, and The Giant Behemoth is no different. Audio wise the film comes with DTS HD Master 2.0 English and also English SDH subtitles. Fans of the film or genre will be happy to have a chance to own this classic in blu-ray. Once again we tip our hat to what the folks over at Warner Archive are doing and highly recommend this to those interested.