Bohemian Rhapsody is a 2018 biographical film about the British rock band Queen. It follows singer Freddie Mercury’s life from his joining the band in 1970 to their Live Aid performance at Wembley Stadium in 1985. A British-American venture, it is produced by 20th Century Fox, New Regency, GK Films, and Queen Films, with Fox serving as distributor. Directed by Bryan Singer, it is written by Anthony McCarten, and produced by Graham King and Queen manager Jim Beach. It stars Rami Malek as Mercury, with Lucy Boynton, Gwilym Lee, Ben Hardy, Joe Mazzello, Aidan Gillen, Tom Hollander, Allen Leech, and Mike Myers in supporting roles. Queen members Brian May and Roger Taylor served as creative and musical consultants. 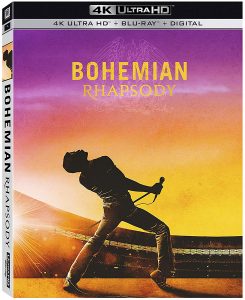 
Freddy Mercury (Rami Malek) is a shy, bucktoothed guy working at Heathrow Airport who is also struggling to identify himself sexually. His conservative family – especially his father – doesn’t get Mercury’s wild antics, especially when he decides to lead a band after a spot becomes available. Mercury attempts to go straight, even asking his long-time friend Mary Austin (Lucy Boynton) to marry him…eventually. But it’s clear that Mercury and his retooled band are in it to win it, sporting a lineup including founders Guitarist Brian May and Drummer Roger Taylor, along with Bassist John Deacon. As they set out to redefine rock, forces at the studio conspire to deny them, eventually forcing Queen to take drastic steps to get Bohemian Rhapsody on the air. When it becomes an immediate success, Queen is off to the races, riding a wave of touring and adoration that they themselves couldn’t have imagined. But that success comes at a cost, as the members fight over creative differences and ponder Mercury’s emerging sexuality. As the band dissolves and struggling to keep his personal life under control, Mercury soon learns that the worldwide epidemic of AIDS has hit home, that his time is limited, and that a career-defining moment at Live Aid awaits him and the band.

If that sounds like the basis for every episode of VH1’s fantastic BEHIND THE MUSIC, it’s because every successful band seems to suffer the same fate: after a meteoric rise, Band A’s singer overtakes the group leading to internal strife before breaking up, only to come back together to experience less success. Queen suffered a similar fate that RHAPSODY tells quite well, thanks to Writer Anthony McCarten. He gives the band a personality, proving that Queen wasn’t just Mercury but a combined effort lead by an electrical engineer and an astrophysicist. Comedic moments are dabbled into the script, but it’s McCarten’s decision to focus on Mercury’s lifestyle decisions that are both the most interesting and yet serve as RHAPSODY’s biggest disappointment. It dabbles in Mercury’s sexuality without addressing it head-on, desiring to serve too many masters and doing all of them not quite as well as they could. Granted, those moments of the band experimenting in the studio are insightful and even fun, but it’s unlikely to impress non-Queen fans.

What does work very, very well is Malek. He is as charismatic and bombastic as Mercury, channeling the singer in a career-defining performance. He inhabits Mercury, much like Gary Oldman did for Winston Churchill in DARKEST HOUR or Daniel Day Lewis in LINCOLN. Yes, he’s that good. Malek portrays Mercury with both the sensitivity of a man struggling with his sexuality and a brilliant singer/performer who gains, loses, and the regains it all back before succumbing to AIDS-related pneumonia in 1991. Malek’s band mates deliver solid performances as well, buoying the ship between operatic stage performances that are spot on, even if they’re not performed by them. There’s also a great appearance by comedian Mike Meyers, but you’ll have to pick him out as he’s largely (and smartly) unrecognizable. Boynton perhaps gets the biggest shaft here, used only as a plot device rather than as someone meaningful, trying to remain Mercury’s moral anchor, especially when he’s on his own as longtime associate Paul Prenter (Allen Leech) wraps his talons around Mercury, submerging him in gay sex and drugs.

There’s also Live Aid itself, an important rock moment whether you were around to see it or not. And that’s the problem: moviegoers might not feel the importance of centering the entire movie around this 20 minutes, even though it comes off as a great performance (albeit appearing lip-synced). There were significant issues on set, as Director Bryan Singer was fired for going AWOL near film wrap, which perhaps caused the apparent lack of focus that plagues the movie. But here’s the crux of my concern: RHAPSODY tells a story that’s become all too familiar and seems like something that should have been made 15 years ago. Granted, the story of Queen has needed time to mature, but the story of Mercury’s coming out is consistently done better these days on television. For all the pomp and circumstance of Singer’s efforts, the result feels all too familiar.


BOHEMIAN RHAPSODY comes to Ultra HD Blu-ray with HDR that classifies enough to get the Ultra HD Premium tag. A label that is given to films that meet certain technical requirements in video and sound. The film looks great with deep rich blacks in the many dark scenes and it gives a great age look to the time period of that of the Live Aid concert. Great video quality all around on this release.


BOHEMIAN RHAPSODY comes with a Dolby Atmos track that will smash through your speakers and let you feel every moment with this iconic band. From dark and murky bars and clubs in the beginning, to sonically sound studios when recording tracks for their albums. BOHEMIAN RHAPSODY’s environment plays to the sound and it feels real to the part. The Live Aid concert is done amazingly well. A very enjoyable experience for the audio department.

Bohemian Rhapsody was announced in 2010, with Sacha Baron Cohen set to play Mercury. After he left the project in 2013 following creative differences with producers, the project languished for several years before Malek was cast in November 2016. Principal photography began in London in September 2017 with Singer as director. In December 2017, Singer was fired for absence and clashing with the cast and crew, and Dexter Fletcher was hired to complete the film. Singer retained sole director credit as per Directors Guild of America guidelines, while Fletcher received an executive producer credit. Filming concluded in January 2018. – wikipedia