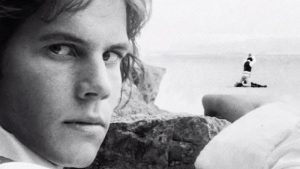 SYNOPSIS: In a dystopian future, American draft dodger Billy Hampton (Bill Paxton in his first role), 19, is brainwashed and programmed by militant feminists to assassinate the Welsh minister of prostitution. Lurching unwittingly toward his goal, he makes a series of furtive connections with societal outliers like himself, including a feral child, a gentle prostitute, a sadomasochistic delinquent, a lovelorn androgyne, a hippie dope dealer, and a mute nymphomaniac, while fending off predators who would sell him into sex slavery. Eventually, he is forced to focus on his mission and face the dreadful dilemma tormenting his psyche: to kill or not to kill.