Doris Day entered her eighth consecutive year as a top-10 box-office star when she boarded The Glass Bottom Boat, a hilarious blending of romantic comedy and the era’s burgeoning spy-movie genre. 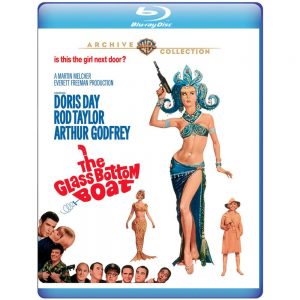 THE GLASS BOTTOM BOAT comes to blu-ray in 1080p HD from Warner Archive as part of the Warner Archive Collection on a made to order Blu-ray. The film has an audio track of DTS HD Master Audio 2.0 Mono and SDH.  A classic that shows its age a bit even with the transfer, but still the best it’s ever looked.  A fun and charming movie that you surely don’t want to miss.  Hopefully we will always have access to these MOD blu-rays form Warner Archive, but there is no telling at when they could get pulled so if your remotely interested you might want to think about ordering soon.

The film was an attempt to appeal both to Day’s traditional fans and to a younger audience. It was a success financially, earning $4,320,000 in North American rentals by the end of 1966.