Rocketman is a 2019 biographical musical film based on the life of musician Elton John. Directed by Dexter Fletcher and written by Lee Hall, it stars Taron Egerton as John, with Jamie Bell as Bernie Taupin, Richard Madden as John Reid, and Bryce Dallas Howard as Sheila Eileen. The film follows John in his early days as a prodigy at the Royal Academy of Music through his musical partnership with Taupin. 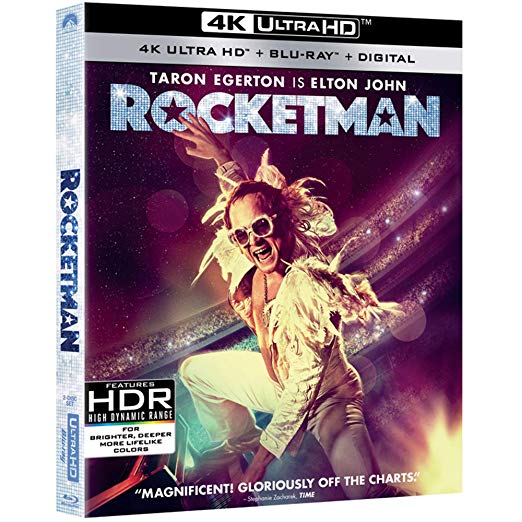 Rocketman follows the life of a young boy who becomes one of the most iconic artists in rock and roll. A biopic that shows the journey of Elton John and covers most all of his beloved songs. An interesting and intriguing life and the edition includes a booklet with a message from Elton John himself. You don’t want to miss this smash hit.

ROCKETMAN blasts onto Ultra HD Blu-ray 4k with a Dolby Atmos track that will rock your home theater system or living room set up a like. Video wise we are blessed with Dolby Vision HDR that provides full thick darks and vibrant brights that look amazing considering the many different loud costumes that Elton wears.

The special features below are located on the blu-ray disc.

Deleted and Extended Scenes with Introduction by Dexter Fletcher

It’s Going to Be a Wild Ride: Creative Vision

Music Reimagined: The Studio Sessions – Behind the scenes in the recording studio with Taron & Elton 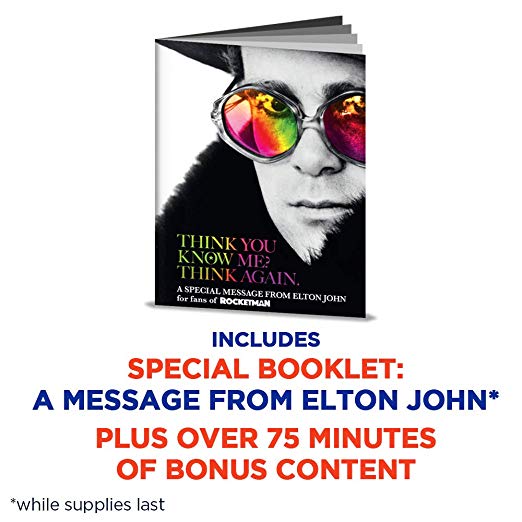 Rocketman premiered at the Cannes Film Festival on 16 May 2019, and was theatrically released in the United Kingdom on 22 May 2019 and in the United States on 31 May 2019. It has grossed $187 million worldwide against its $40 million budget and received positive reviews from critics, with Egerton’s performance, the costume design and musical numbers receiving general praise. – wikipedia