Godzilla: King of the Monsters (released as Godzilla II: King of the Monsters in some markets) is a 2019 American monster film directed by Michael Dougherty and co-written by Dougherty and Zach Shields from a story by Max Borenstein, Dougherty, and Shields. A sequel to Godzilla (2014), it is the 35th film in the Godzilla franchise, the third film in Legendary’s MonsterVerse, and the third Godzilla film to be completely produced by a Hollywood studio.

Purchase GODZILLA: KING OF THE MONSTERS on Blu-ray Today! 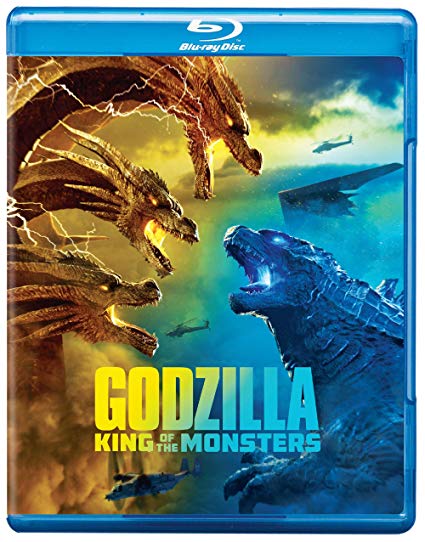 Godzilla King of the Monsters is the follow up to the smash hit and revival of Godzilla with 2014’s “Godzilla”. This 35th film in the Godzilla franchise, and 3rd to be produced by a Hollywood studio follows Godzilla who the humans rely on to defeat King Ghidorah who has awakened and called upon other titans to destroy the world.

The monsterverse is a live and well for Legendary Pictures and I look forward to the future Godzilla vs. Kong slated to come still in 2020.

The video quality is strong for this blu-ray, but unfortunately we aren’t reviewing the Ultra HD Blu-ray 4k which boasts HDR10+. The audio quality on the other hand is still exceptional as the Dolby Atmos track delivers romping stomping action that will blast through your home theater set up with every roar. Some soundbars also include Atmos capability and would be great for your main tv watching room if you don’t have a home theater.

Godzilla: King of the Monsters was released on May 31, 2019, to mixed reviews, with praise for the visual effects, action sequences, cinematography, and musical score but criticism aimed at the pacing, tone, story, and characters. – wikipedia