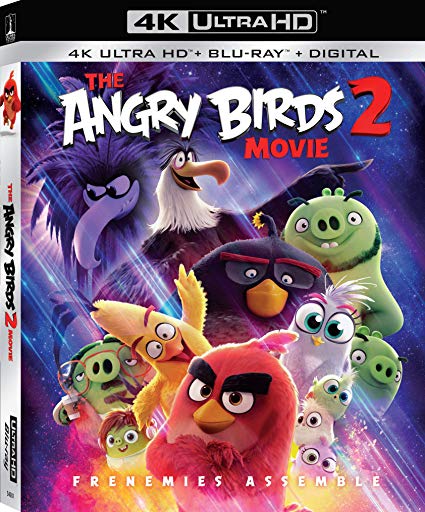 Red, Chuck, Bomb and the rest of their feathered friends are surprised when a green pig suggests that they put aside their differences and unite to fight a common threat. Aggressive birds from an island covered in ice are planning to use an elaborate weapon to destroy the fowl and swine way of life. After picking their best and brightest, the birds and pigs come up with a scheme to infiltrate the island, deactivate the device and return to their respective paradises intact.

ANGRY BIRDS 2 comes to Ultra HD Blu-ray 4k with IMAX enhanced scenes, HDR, and a DTS X audio track. Animation always looks amazing in blu-ray and that is no different with UHD. Super dark blacks, and vibrant brights highlight this release. Angry Birds 2 is a visual and visceral treat.

The Angry Birds Movie 2 bonus features include the following:

ALL NEW MINI MOVIE! – Live Stream: When Silver attempts her first livestream, Red is the ultimate Angry Bird while the adorable Hatchlings get into mischief.

DIY Family Fun!:
“Hangry Birds: Popcorn Balls”: No need to be angry or hangry with this simple, fun cooking tutorial. Follow along to make Red’s go-to comfort food and enjoy these tasty popcorn balls at home.

“Smarty Birds: Crafty Volcano”: From the volcano on Eagle Island, Zeta plots her sinister plan and sends her lava balls flying. But why should Zeta have all the fun? Build your own volcano and watch it erupt combining crafts and science in this brainy how-to video!

“Crafty Birds: Pig Snot!”: Ready to roll up your sleeves and get a little messy? It’s time to mix a few ingredients and create your very own pig snot (slime!). Just make sure to keep it away from Bomb…he likes to drink it. (Eeeew!)

“Bird Watching”: In this hilarious “birds-eye” view of the real-life species that inspired the artists, we take a trip to the LA ZOO to get up close and personal with real-life Mighty Eagles, Blue Birds, Toucans, and more. With fun reactions from the cast intercut throughout the piece – get ready to laugh, learn and meet some amazing avian friends.

“Hatching the Hatchlings”: The Hatchlings are soooooo cute! And in Angry Birds 2, we get to join them on their very own adventure! Meet these mischievous little troublemakers as we talk to filmmakers about the creation of the Hatchlings and their expanded storyline in the film, and hear from cast members about their love for these adorable baby birds.

“Happy Thanks-pigging”: Zeta is not a fan of the traditional Thanksgiving menu!

“Jingle Birds: A Holiday Song From The Cast of Angry Birds 2”: Sing along with Rachel Bloom and Jason Sudeikis with a new twist on this holiday classic.

The film was theatrically released on August 2, 2019 in the United Kingdom and Ireland, and in the United States on August 13. It has grossed over $145 million worldwide and received average review. – wikipedia