Good Boys is a 2019 American coming-of-age sex comedy film directed by Gene Stupnitsky, in his directorial debut, and written by Stupnitsky and Lee Eisenberg. The film stars Jacob Tremblay, Keith Williams, and Brady Noon as three sixth-graders who find themselves involved in a series of misadventures as they try to attend a party hosted by their popular classmates. Seth Rogen and Evan Goldberg serve as producers through their Point Grey Pictures banner. 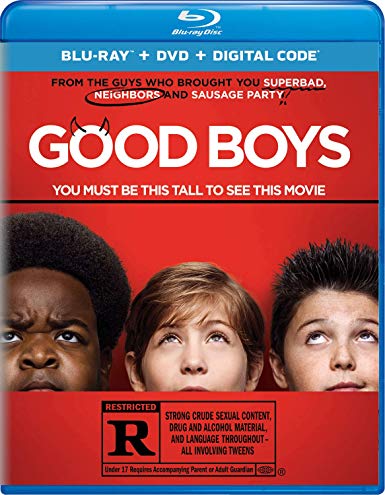 Three 6th grade boys ditch school and embark on an epic journey while carrying accidentally stolen drugs, being hunted by teenage girls, and trying to make their way home in time for a long-awaited party. Good Boys seems like it was trying to be a movie that would be heralded for a new generation as to the same affection as the Sandlot yet the R rated version. It has a lot of good laughs, but for whatever reason for me it lacked that mystical charm I felt it was trying to capture and at moments did get close. Never the less I think it’s still worth a watch at least to see if its one to own, or simply a one-time watch for you.

GOOD BOYS comes to blu-ray with an English DTS HD Master Audio 5.1 track that does a fine job. There are lots of music cut scenes so to speak where music is played between scene changes. Lots of rap songs etc with bass that allow the track to shine. Dialogue is clear and sounds of the era technically. No complaints. Picture quality is great to and high quality.

The film had its world premiere at South by Southwest on March 11, 2019, and was theatrically released in the United States on August 16, 2019, by Universal Pictures. The film received generally positive reviews from critics and has grossed $110 million worldwide on a $20 million budget. – wikipedia