JAY AND SILENT BOB REBOOT is a 2019 American buddy comedy film written, directed, edited and starring Kevin Smith. Referring to his 2001 comedy Jay and Silent Bob Strike Back. It is the eighth film in the View Askewniverse. The film also stars Jason Mewes, and features cameos from Jason Lee, Shannon Elizabeth, Rosario Dawson and Ben Affleck. 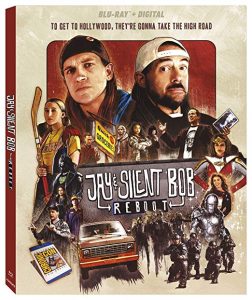 This reboot kicks off at the place you’d expect it too. Right outside the Quick Stop in Leonardo, the hanging place of the degenerates known as Jay and Silent Bob (Jason Mewes and Kevin Smith). Which RST Video being phased out by companies such as RedBox the video store has become a chicken sandwich joint from what it appears. But, it is actually a front for the marijuana growing grounds for Jay and Silent Bob that is about to be raided by the police. After the arrests of Jay and Silent Bob they are taken to court for their fate only for the charges to be dropped then hit with a lawsuit for the ownership of their names. So now the boys must once again travel across the country to Hollywood to claim what is rightfully theirs.

Overall, this film is what all the true die hard Kevin Smith fans want out of a View Askew film. This has the same vibe as the original Jay and Silent Bob movie and then some. The audience can tell that this movie didn’t have the restrictions of any studios and Kevin Smith was able to make the Jay and Bob movie that he truly wanted to make. With a star studded cast with the likes of Jason Lee, Chris Hemsworth, Ben Affleck, Matt Damon, Chris Jericho and many more Hollywood elite that have worked with Kevin Smith in some capacity. Most of these rolls are small and just cameos since the heart of the film are revolved around Jason Mewes, Kevin Smith, and the daughter of Kevin Smith, Harley Quinn Smith.

If you are wanting a fun watch movie with lots of laughs and nostalgia, then this will be the movie for you. Even 18 years later the stoner duo are able to bring the same energy and laughs they have in previous films. Especially if you know about the back story of Kevin Smith starting production of this film a year to the day of his life threatening heart attack. Kevin Smith put his all into the film and that truly shows. 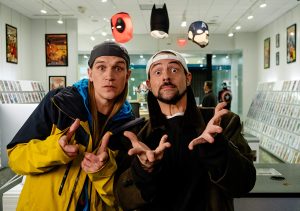 The video and audio on this blu-ray are about what you expect from most other films directed and written by Kevin Smith. The majority of the film contains heavy dialogue with very little action. This is no Michael Bay film so the effects aren’t very needed. But the sets used and created in the film are very clear through the film. There is not very much CGI needed or used through this film. The audio was very clear and being able to hear all the dialogue was no issue. Since dialogue is one thing that Kevin Smith is a master of I would expect that would be a very high thing to make sure is correct while filming and editing. Overall, video and sound met my expectations.

One thought on “JAY AND SILENT BOB REBOOT Blu-ray Review”