Purchase KNIVES OUT on Blu-ray Today! 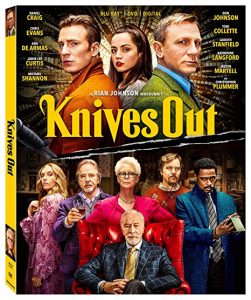 A roller coaster ride of a whodunnit that get’s better as it chugs along.

When renowned crime novelist Harlan Thrombey dies just after his 85th birthday, the inquisitive and debonair Detective Benoit Blanc arrives at his estate to investigate. From Harlan’s dysfunctional family to his devoted staff, Blanc sifts through a web of red herrings and self-serving lies to uncover the truth behind Thrombey’s untimely demise.

KNIVES OUT comes to blu-ray with a 1080p presentation and a Dolby Atmos audio track. A score and track that allows great depth to showcase the Atmos track whether be it dialogue, car chases, fights, or the ever so thrilling and at times poignant score.

Lionsgate announced in February 2020 that a sequel was in the works, with the film possibly becoming a franchise centered on Daniel Craig’s character. – wikipedia