Richard Jewell is a 2019 American biographical drama film directed and produced by Clint Eastwood, and written by Billy Ray. It is based on the 1997 Vanity Fair article “American Nightmare: The Ballad of Richard Jewell” by Marie Brenner, and the 2019 book The Suspect: An Olympic Bombing, the FBI, the Media, and Richard Jewell, the Man Caught in the Middle by Kent Alexander and Kevin Salwen. 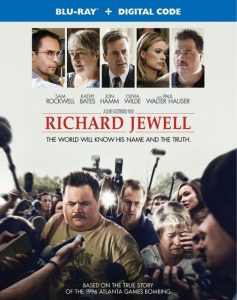 Director Clint Eastwood’s biographical drama is based on the true story of Richard Jewell: the American police officer and security guard who thwarted the Centennial Olympic Park bombing at the 1996 Summer Olympics in Atlanta. Jewell (Paul Walter Hauser) saved thousands of civilian lives when he found a bomb-filled backpack, but eventually suffered an intense trial by media after he became a suspect. The film also stars Olivia Wilde, Jon Hamm, and Kathy Bates.

RICHARD JEWELL comes to blu-ray with a 1080p presentation and DTS HD Master 5.1 audio track. A dialogue heavy track the DTS HD Master track handles it quite well with the center channel and fronts baring the bulk of the load.

Rating: Rated R for language including some sexual references, and brief bloody images.

The Real Story of Richard Jewell

The film had its world premiere on November 20, 2019, at the AFI Fest, and was theatrically released in the United States on December 13, 2019, by Warner Bros. Pictures. It received positive reviews from critics, with praise for the performances (particularly Bates and Hauser) and Eastwood’s direction. – wikipedia